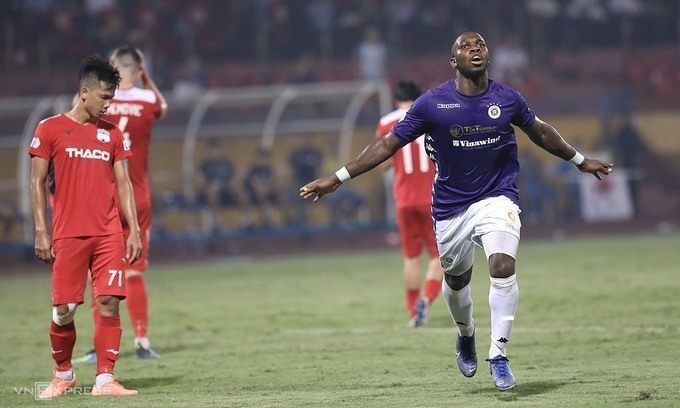 Rimario Gordon celebrates after scoring a double during a V. League 1 game between Hanoi FC and Hoang Anh Gia Lai on June 6, 2020. Photo by VnExpress/Ngoc Thanh.

Binh Dinh forked out big time for the 26-year-old Rimario, who had nearly signed with Hong Linh Ha Tinh.

The forward will be an important addition to the club, recently promoted to V. League 1. Previously, it had also recruited South Korean defender Anh Byung-keon from Saigon FC.

After a rough start with Hoang Anh Gia Lai in 2018, Rimario joined Thanh Hoa FC the same year. He signed with Hanoi FC in 2020 and became the joint top scorer of V. League 1 along with Brazilian striker Pedro Paulo of Saigon FC. Both netted 12 goals during 2020 V. League 1.

Rimario is highly rated for his strength, balance, acceleration and finishing although he received some criticism at Hanoi FC for his weak link-up ability.

Besides powering up their squad, Binh Dinh is also upgrading their home stadium Quy Nhon.

Due to the Covid-19 pandemic, most international flights have been frozen, which made recruiting foreign players difficult. Therefore, clubs have had to buy foreign players already playing in Vietnam as the new season approaches, albeit at hiked up prices.

The new season of V. League 1 is set to begin on January 16.