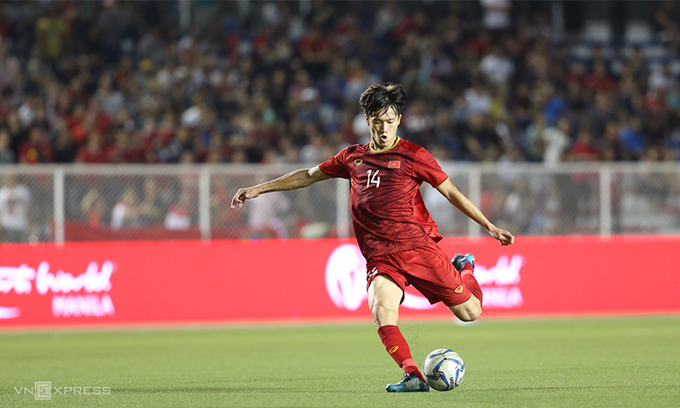 Nguyen Hoang Duc takes a shot in the SEA Games 30 match between Vietnam and Indonesia on December 1, 2021. Photo by VnExpress/Duc Dong

Nguyen Hoang Duc is expected to be the face of a new generation of Vietnamese players ahead of AFF Cup this year.

Hoang Duc is one of the most promising talents of Vietnamese football at present. At 23 years old, he is already the team’s midfield boss in every game.

For the past two years, Duc has shown immense improvement and become one of the most important players on the national team.

Statistics show Duc was the best player on the team after the first four games of the final World Cup qualification round. He has made a total of 42 accurate passes and 42 possession wins (more than anyone in his squad).

With his impressive and solid performance at both club and national levels, Duc has received attention from foreign clubs but hasn’t accepted an offer.

AFF Cup was supposed to take place in 2020, but was postponed until this year due to Covid-19. The organizers decided to keep the name AFF Cup 2020 for sponsorship purposes. The tournament will take place in Singapore from Dec. 5 to Jan. 1, 2022.

Vietnam, the defending champions, are in group B with Malaysia, Indonesia, Cambodia and Laos.

Australia and Vietnam’s levels not too far apart: coach Park

Administrator - 11 June, 2020 0
About 10,000 people were in the stands to watch a highly-anticipated National Cup game between two Vietnamese football clubs, the first match that allowed spectators since the novel coronavirus disease (COVID-19) pandemic hit the Southeast Asian country.