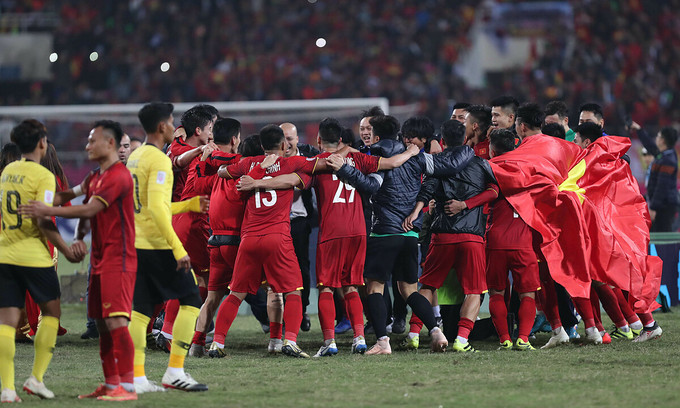 Vietnam can fully focus on World Cup 2022 qualifiers with AFF Cup rescheduled to April next year.

The national team will have more time on their hands to focus on World Cup 2022 second round qualifiers in October. Leading group G on 11 points, they stand a great chance to advance to the third round, if scoring a least seven more points in the three remaining games.

After the qualifiers, Vietnam will have time to prepare for defending their AFF Cup title. The AFF Cup, which Vietnam won in 2018, was previously scheduled from November 23 to December 31 this year.

Another advantage from the delay is Vietnam will not suffer a shortage of players. HCMC FC and Than Quang Ninh are the country’s representatives at AFC Cup this year with high chances of going further. HCMC are leading their group while Quang Ninh are second in theirs. In this case, each team will play ASEAN zone semifinals on October 21, to hopefully compete in the zone final on November 4. Inter-zone semifinals will take place on November 24 and 25, followed by the tournament final on December 2.

If AFF Cup were to take place as originally scheduled, it would clash with the AFC Cup program. HCMC FC and Than Quang Ninh would not have to release players for the national team, since AFF Cup is not a FIFA tournament, robbing Vietnam of its key players.

Furthermore, with AFF Cup moved to 2021, Vietnam would field its strongest squad at the tournament, with many important players, particularly in defense, recovered from injury and back on form. Centre-backs like Do Duy Manh and Tran Dinh Trong will most likely be absent if AFF Cup were to be hosted this year since they will not return to training until November. Besides, goalkeeper Dang Van Lam, now playing for Thai club Muangthong United, still needs time to regain his form after a long absence as Thailand has suspended football since March.

Not only the national team but clubs will also benefit from the postponement of AFF Cup. Domestic leagues have been suspended due to the new outbreak of Covid-19 and they can rearrange their schedule more comfortably when there’s no AFF Cup at the end of this year. All domestic competitions will have better chance to reach the finish line in 2020.

Other Southeast Asian countries also benefit from AFF Cup moving to April 2021 as they continue to deal with their own Covid-19 plights. Thai League, for instance, is expected to return in September and conclude in April. And just like Vietnam, Malaysia will have more time to focus on World Cup 2022 qualifiers, lying second in group G, just three points behind the Golden Dragons. Vietnam and Malaysia will clash in perhaps the most intense group game on October 13.

In the next edition of AFF Cup, each team will be able to select up to 70 players in their preliminary squad and 30 in the final list. Meanwhile, each can register 23 players per game instead of the previous 20.

Challenge Vietnam 2020 will take place in Nha Trang this September