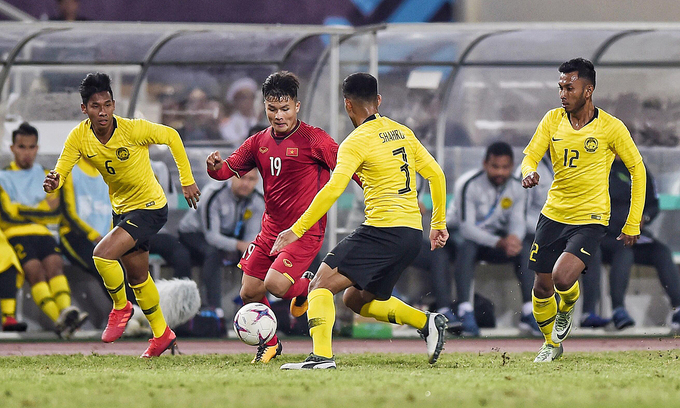 Vietnam national team (in red) at the AFF Cup final against Malaysia in 2018. Photo by VnExpress/Duc Dong.

At an online meeting on Monday chaired by AFF president Khiev Sameth, council members, including Vietnam Football Federation (VFF) vice president Tran Quoc Tuan, and committee members discussed whether the 2020 AFF Cup could go ahead as planned amid the Covid-19 outbreak.

Based on the evaluation of the pandemic situation in Southeast Asian countries, the committee said the situation would remain bad until the end of this year, and so the event could not take place as scheduled.

Keeping fans in mind and realizing the tournament should not be devalued, the committee members suggested postponing it to next year.

But Tuan said there is a heavy schedule of international tournaments next year, and so a number of issues need to be sorted out if the AFF Cup is to be played.

“The Emergency Committee will continue to discuss to find the ultimate solution.”

The next meeting of the committee will be on July 30.

According to the current schedule, the AFF Cup will be played from November 23 to December 31, with home and away matches for each team from the group stage to the final as in the 2018 edition.

Vietnam is the defending champion, having claimed the title in 2018.

In the latest edition of AFF Cup, each team can select up to 70 players in their preliminary squad and 30 in the final list. Teams can register 23 players per game instead of the previous 20.

All football tournaments in Vietnam have been postponed after Covid-19 local infections resurfaced last week.

Administrator - 21 May, 2020 0
Vietnamese star striker Nguyen Cong Phuong has joined dozens of footballers from the Asian Football Confederation (AFC) in the ‘Break The Chain’ campaign to raise awareness of the novel coronavirus disease (COVID-19) pandemic.