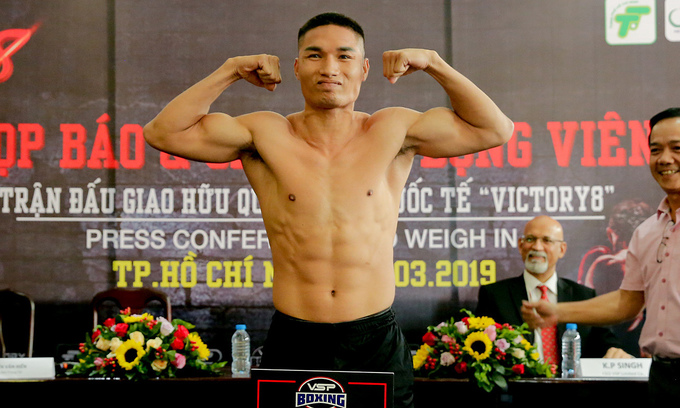 Vietnamese boxers will take on international rivals in the Victory 8 tournament in the Philippines in May.

Nguyen Van Hai, one of the nation’s top boxers, will fight Australia’s Francis Chua for the WBC Australasia lightweight title.

The 10-round match will be one of the two main matches of this event in Manila, which will feature nine other Vietnamese fighters.

Hai, 32, has three victories in three pro games with one knockout. The rising Australian star has a record of seven wins, one loss and one draw.

Nguyen Van Duong, the Vietnamese boxer who has qualifed for the 2020 Olympics, will make his professional debut against Ariel Puton of the host country in the lightweight discipline.

Vo Thi Kim Anh is the other woman boxer.

Yen Trang, a Victory 8 spokesperson, said the event would possibly be held behind closed door with a maximum of 100 spectators, but broadcast and streamed live.

Victory 8 was first scheduled to take place in Saigon but was moved to the Philippines due to the spread of Covid-19.

Administrator - 26 October, 2020 0
BIRMINGHAM, England – A superb first-half hat-trick from Ollie Watkins helped Aston Villa to a stunning 7-2 victory over Liverpool in the Premier League on Sunday to end the champions’ 100% start to the season in extraordinary fashion.

Administrator - 18 March, 2020 0
Vietnam will try to defend their trophy at the 2020 AFF Championship, which is Southeast Asia’s football championship tournament, and advance to the third Asian qualifying round of the 2022 FIFA World Cup, according to a Vietnam Football Federation (VFF) executive.