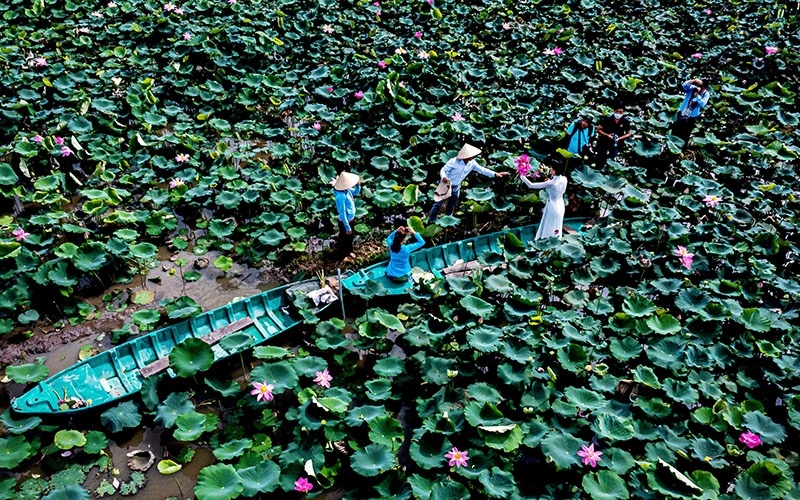 In 2014, a community-based tourism model titled "Thap Muoi lotus field" was launched to the surprise of tourists near and far. "Thap Muoi lotus field" is located at the Go Thap special national relic site, located in Thap Muoi District. There are seven households that are exploiting forms of experience tourism, such as canoeing to admire the lotus fields, fishing, and enjoying country cuisine, which attracts a large number of tourists to visit the area.

The appearance of this model has created a bright spot for the tourism industry in Dong Thap. Accordingly, many localities in the province invested more in tourism. Many new tourism products have appeared, innovating the form of service. To date,Dong Thap has 16 community tourist sites with lotus growing areas with medium and large areas.

The province has quickly built a local brand from the lotus image. In 2016, the People’s Committee of Dong Thap Province approved the project "Creating the image of Dong Thap".

The first task of the project is to build the brand name "Dat Sen Hong" (Pink Lotus Land) with the funny symbol "Be Sen" to put into the Dong Thap image identification system. Regarding tourism development until 2020 in the direction of "ecology, community culture and spirituality", Dong Thap tourism offers a relaxing and fresh lotus space with the slogan "Dong Thap – As pure as Lotus". The certification mark "Sen Thap Muoi" (Thap Muoi Lotus), protected by the National Office of Intellectual Property of Vietnam (NOIP), is considered a lever to open a new direction for the province’s lotus.

Dong Thap Province currently has more than 870 hectares of lotus growing area. According to preliminary statistics, the province has more than 220 products from lotus. Since implementing the tourism development project, Dong Thap Province has focused on building the tourism brand "Dong Thap – As pure as Lotus", the image of the lotus has been increasingly affirmed, thus becoming a symbol of the province. Thap Muoi is a district with many potentials and strengths in lotus tourism economy, gradually building the image of "Lotus kingdom and spiritual culture" by combining the exploitation of traditional cultural elements during the reclamation period, spirituality, and lotus. Each year, the district has nearly 250ha of lotus cultivation.

According to the Department of Agriculture and Rural Development of Dong Thap Province, most models on lotus trees today are combined with the development of experience tourism services. These combined tourism activities help increase profits by about 50 million VND per hectare per year, with negligible additional investment costs. Specialised cultivation models and crop rotation combined with lotus tourism have created stable jobs for people. As such, lotus is not only helping to improve their livelihoods but also provides a "spiritual source of income" for tourists and locals alike.

Dr. Ngo Thi Thu Trang, a lecturer at the Vietnam National University – University of Social Sciences and Humanities, Ho Chi Minh City, said that Dong Thap Province has made a good brand of lotus as well as promoted the value of lotus associated with tourism. In the coming time, the province needs to develop the raw material area to affirm the existing position of Dong Thap. The province needs to strengthen cooperation, linking regions and linking four houses, combining the development of various types of tourism-services, towards the goal of sustainable production.

Chairman of the People’s Committee of Dong Thap Province Pham Thien Nghia expressed: "The province has policies to develop larger lotus fields, both to promote tourism and create a source of raw materials to form a chain of lotus products. We will spread the message, the pure spirit like the lotus soul of Dong Thap Province to all friends at home and abroad, with the desire to develop tourism as well as attract investors to Dong Thap."