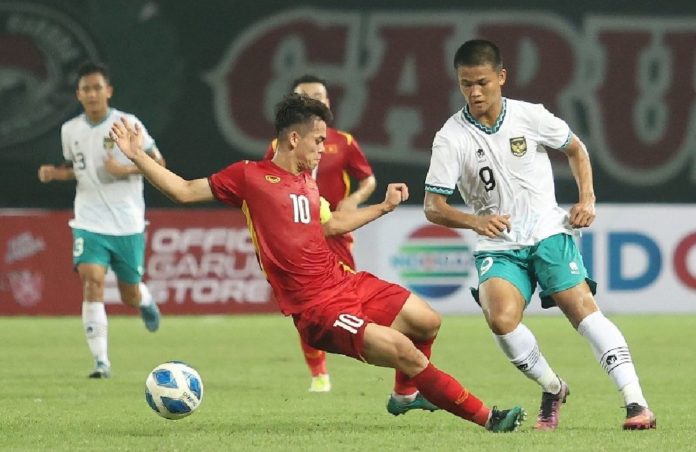 Both teams chose to carry out their offensive tactics with multiple attacks staged in the first minutes of the match.

The Vietnamese boys gained the upper hand from the outset, forcing their opponents to commit many fouls as they tried to stop them.

Indonesia had a close shot in the 27th minute, but the ball was eventually blocked by Vietnamese goalie Cao Van Binh.

Toward the end of the first half, Nguyen Dinh Bac had an opportunity to open the scoring for Vietnam after surpassing two Indonesian players, but the ball ended up hitting the bar.

The junior Golden Stars sped up the game and placed more pressure on Indonesia’s net in the second half.

In the 55th minute, Dinh Bac entered the penalty area and passed the ball to Nguyen Quoc Viet, but Viet’s shot could not get pass goalie Cahya Supriadi.

Indonesia had a counterattack two minutes later, with Marselino Ferdinan taking a long shot that eventually hit the crossbar.

Their subsequent shots were mostly made from outside the box, which did not pose considerable threats to Vietnam’s net.

The Vietnamese players managed to get close to the Indonesian net on multiple occasions, but were unable to take any successful shots.

Both teams had to accept a tie at the end of the match.

Running from July 2 to 15 in Indonesia, the 2022 AFF U-19 Youth Championship is the 18th edition of the tournament organized by the ASEAN Football Federation.

The group stage consists of two groups, with Group A including Myanmar, Thailand, Vietnam, Indonesia, the Philippines, and Brunei, and Group B comprising Malaysia, Laos, Timor-Leste, Cambodia, and Singapore.

Myanmar and Thailand rank first and second in Group A, followed by Vietnam and Indonesia.