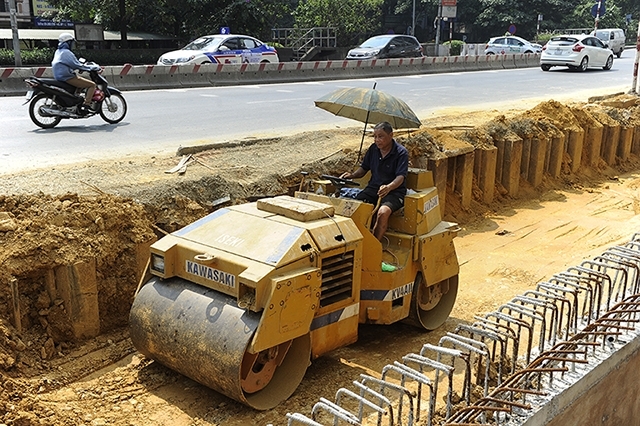 According to Nhan Dan (People) Newspaper’s reporters, on May 18, the peak of the heat wave from the beginning of the summer to now, at the construction site of Mai Dong bridge intersection, expansion project and construction of a viaduct on high belt road 2, widening Nguyen Khoai street (section of Tran Khat Chan street to Luong Yen gas station), engineers and workers are hustling to work under the sun like fire.

Female workers work hard under the summer sun like fire.

Workers under the hot sun

A worker sprayed water on himself to reduce the heat.

Geodetic worker with a sun umbrella on the construction site

The welder works in the hot sun.

Despite being sealed, working under the hot 40 degrees Celsius is a challenge for workers.

Despite sitting in the excavator cockpit, the male worker still equips himself with a conical hat to reduce the heat.

Workers spray water on the roadbed to reduce heat.

PM calls for redoubling of efforts to compensate disaster losses

Foreign Minister holds talks with US Secretary of States

‘Patriotic bread’ all the rage in Hanoi

Administrator - 15 May, 2020 0
Historic sites and tourist attractions in Hanoi reopened to tourists on May 14 nearly two months after being closed to prevent the spread of the deadly novel coronavirus.

Administrator - 26 August, 2020 0
An array of documents and photos featuring the life of President Ho Chi Minh and his revolutionary career has gone on show at the Ho Chi Minh Museum in Hanoi.