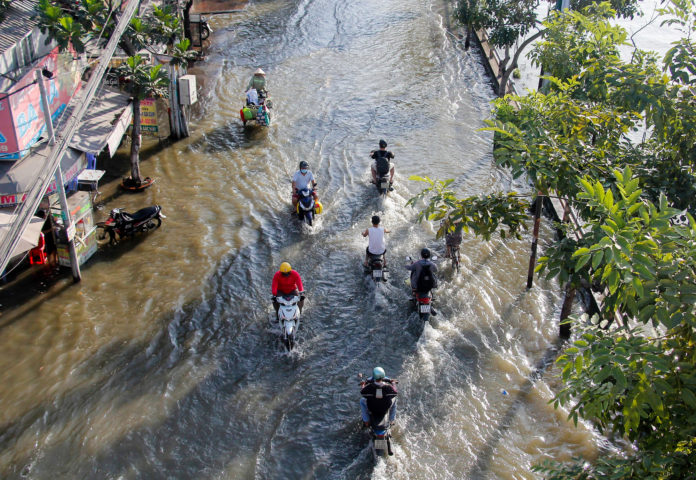 Statistics from the southern hydro-meteorological center showed that water levels at Nha Be Station reached 1.65 meters at 4:00 pm on Sunday, resulting in the inundation in many neighborhoods in the southern city.

On Quoc Huong and Nguyen Van Huong Streets in District 2, authorities had to prepare water pumps to boost drainage capacity.

On Me Coc Street in District 8, residents had to use sandbags and other objects to prevent water from flowing into their houses.

Some people also expressed their concern that the ongoing water sanitation improvement project might exacerbate the flooding.

Several sections of Tran Xuan Soan Street in District 7 were submerged by floodwaters up to 0.5 meters deep, causing a lot of difficulties for commuters.

The situation also affected local businesses as the number of customers dropped significantly due to the flooding.

This is the highest tide to have hit Ho Chi Minh City so far this year, Le Dinh Quyet, an official of the southern hydro-meteorological center, told Tuoi Tre (Youth) newspaper.

The tide will peak late on Monday afternoon, with water levels at the Nha Be Station forecast to top 1.71 meters at 5:00 pm, Quyet elaborated.

Due to the effect of the northeast monsoon and strong waves at sea, the tidal water may rise higher than forecast, he added.

This article was originally published in Tuoitrenews

Administrator - 26 November, 2020 0
The 11th lunar month is when the Ha Nhi ethnics celebrate their new year, known as Khù Sự Chà. It is a time for relaxation, entertainment, reunions, and passing on best wishes. The holiday lasts for five days after harvest.

Administrator - 26 November, 2020 0
Bắc Ninh authorities on Monday ordered an investigation into underage labour in service and manufacturing units in the province following reports of alleged serious abuse of a 14-year-old boy in a restaurant in the northern province.

Administrator - 29 July, 2020 0
HCMC – In celebration of the upcoming Vietnam Pride Month (September 2020), the United Nations in Vietnam is running a social media campaign, the “Safer Home for LGBTIQ People”, to promote supportive and safe home environments for the lesbian, gay, bisexual, transgender, intersex and questioning (LGBTIQ) community in the country.

Cost of living for expatriates in 2020: Saigon moves up, Hanoi...

Administrator - 19 June, 2020 0
Ho Chi Minh City edged up nine places in a global ranking of the most expensive places for expatriates in 2020, while Hanoi moved down four places.