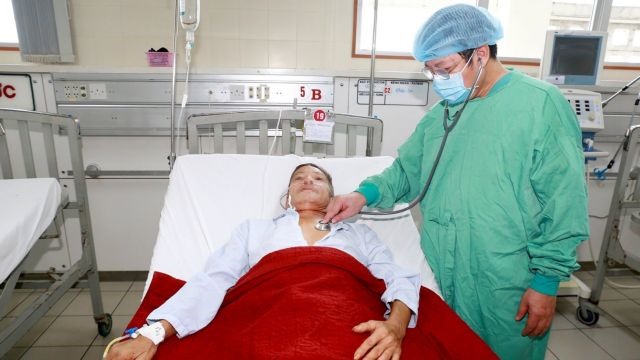 About 50 per cent of the patients were from Thừa Thiên-Huế Province while the rest were from other provinces such as Thanh Hóa, Hà Tĩnh, Quảng Bình and Quảng Trị.

Many patients arrived at the hospital in late stages of the disease, with sepsis, septic shock or multi-organ failure making treatment difficult and costly, according to the hospital.

The sudden increase in the number of cases in September this year was similar to  other studies in epidemic areas around the world.

The number of cases of Whitmore’s disease is closely related and directly proportional to annual rainfall, and the rainfall in Việt Nam is especially high.

These bacteria are found in soil, dirty water or in rice fields and stagnant water. They can spread to humans and animals by direct contact with sources of contamination.

Whitmore’s disease is mainly caused by bacteria that enter the body through the skin, or people who inhale dust, steam, or drink contaminated water.

At the site of entry they cause pustules that grow depending on the degree of the case, sometimes even become a large abscess.

If not detected and treated promptly, the disease can cause septic shock causing failure of major organs leading to the risk of death.

Whitmore’s disease is common in people with diabetes, with about 37-60 per cent accounting for the total. The shortest incubation period recorded was one day and the longest was 62 years.

Most patients with Whitmore have diverse, ambiguous and multiorgan clinical symptoms. Diagnosis is easily overlooked and mistaken for other diseases, especially tuberculosis due to its similar symptoms.

Hoàng Thị Lan Hương, deputy director of the Huế Central Hospital said it people should be wary of Whitmore’s disease between June and November if they were at least 35 years old and been hospitalised with pneumonia, fever, multiple abscesses, diabetes, alcoholism, chronic lung disease, chronic kidney disease, cancer, people using corticosteroids and those working directly with soil or wastewater.

To proactively prevent Whitmore’s disease, people needed to limit exposure to sources of pollution, wear shoes, sandals and gloves when in contact with soil, dirty water or flood water.

If people had open wounds or sores, it was necessary to avoid contact with heavily polluted soil or flood water.

People with chronic diseases such as diabetes and immunodeficiency needed care and protection from damage to prevent infections caused by flood water.

This article was originally published on Vietnamnews

Over 80% of local citizens agree to establishment of Thu Duc...

Administrator - 12 October, 2020 0
Over 80% of residents who participated in a poll in Ho Chi Minh City’s districts 2, 4 and Thu Duc agreed to merge those three districts into Thu Duc City.