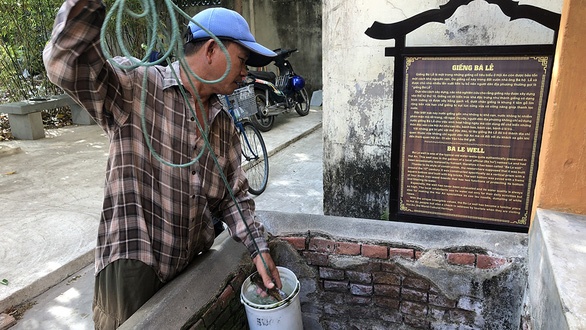 In Hoi An Ancient Town – a popular tourist destination in central Vietnam’s Quang Nam Province – selling well water is a recognized occupation and many people have pursued this job.

The only source – the Ba Le ancient well – has a special appeal to local people.

It has provided a clean water supply for household consumption and culinary practices.

The well has been around and never dried since the 10th century.

Selling water from a well

The streets of Hoi An Ancient Town are unusually quiet due to the impact of the COVID-19 pandemic.

But the silence was disrupted by the sound of walking feet coming from a ragged old man who was carrying water along the lines of vintage houses.

“Who wants some Ba Le well water?” he cried.

A wooden window on Nguyen Thai Hoc Street creaked open. A female voice came out, “I want some.”

Nguyen Thi Thu Trang, the buyer, said that for decades, her family have used this water source for cooking, especially for preparing local specialty dishes like cao lau and mi Quang, both of which are noodle courses.

Despite the prevalence of clean fresh water from water plants, Hoi An residents cannot part with the Ba Le well.

According to Trang, her two major ‘contractors’ for the well water are Nguyen Quoc, who lives in the old town, and Huynh Ngoc Noi, who resides across the river in Commune 3, Duy Vinh Ward, Duy Xuyen District, Quang Nam Province.

At around 8:00 am, the 10-square-meter area of the Ba Le ancient well was occupied by a single man – Noi – on a shabby bicycle with two large plastic baskets hanging on the backseat.

He parked his bicycle right next to the well and quickly cleaned up the space around there, which was filled with leaves and dirt, using a tiny broom he picked from a nearby corner.

This 54-year-old water transporter has remained loyal to this job for 41 years, serving only the people in the old town.

Noi considers the well as his livelihood for life. For decades, he has not had a single day off.

The man was adopted by a woman who lives across the Thu Bon River when he was a child.

His foster mother used to be a well water seller, and Noi dabbled his feet in at age 13.

He has been on the job ever since.

Hoi An Ancient Town is tiny. The farthest anyone can get within its scope is under two kilometers. Therefore, Noi knows every single person here and he himself is rather well known.

From his jacket pocket, he revealed a list of the restaurants and households that he frequents each day.

For decades, these have been his stopovers. He knows like the back of his hand all the family members of these places, but has to keep a written record in case money disputes arise.

Most of the time, Noi gets paid right on the dot, but many household owners cannot pay in cash upon delivery, so their payments are made at the end of the month.

To get the water up from the well, he uses a bucket attached to a long string placed over the well, which is around 10 meters deep.

The clean and fresh water goes straight through a fabric sieve at the tip of the two water cans on his bicycle.

Once the cans have been filled to capacity, he embarks on this delivery trips.

His decades of hard work transporting water has kept his family fed.

Although the manual labor is tough and the old man might physically snap along the way, the remuneration is minimal in comparison.

During this pandemic, this job has helped his family so much.

Noi believes that selling well water this way is still much less physically demanding than being a construction worker or a xe om driver.

Besides the two water cans, Noi’s bicycle is another essential tool.

It was bought when he was 27 years old. Before that, he had been walking with the cans of water balanced from a peg on his shoulders.

With enough money, he purchased an old made-in-France bicycle and has stuck to it ever since.

The bicycle is half his age.

“It is too old. It shrieks with every pedaling. It breaks down all the time. But whatever is broken, I will fix it,” Noi said.

“Now there is only the frame left, but it’s not really very sturdy.

“There are cracks here and there.

“I’ve had them repaired a few times.

“I take it to the repair shop whenever there’s a new crack somewhere, and I apply some paint on it to prevent rust.”

Following in his father’s footsteps

In 2014, the Vietnam Record Association recognized the longest-living well water seller in Vietnam, Nguyen Duong, who passed away in 2019 at the age of 90.

After his father died, Nguyen Quoc followed in his footsteps and kept this service alive.

Quoc has 15 families and restaurants as his customers.

Quoc spends the rest of the day at home while his wife goes to work.

Their children have become financially independent, so the money they make is basically enough.

According to him, tourism in Hoi An before COVID-19 struck was in blossom, so his service was quite in demand.

For days he pulled out all the stops and earned a few hundred thousand dong (around $10-20).

Due to the pandemic, however, only about 10 households are using his service on a daily basis.

The buyers sometimes offer him a small tip as they empathize with his difficult life.

As the earnings from this work are too low, there are only a few well water sellers left, some of whom are temporary workers.

Certain sellers have even upgraded their capacity with a large container attached on their motorbike in order to serve ‘bigger’ customers.

Administrator - 3 November, 2020 0
HCMC – An exhibition showcasing 60 wooden carvings, zinc and stone block prints in the central city of Danang is raising funds for victims of floods and landslides in central Vietnam.