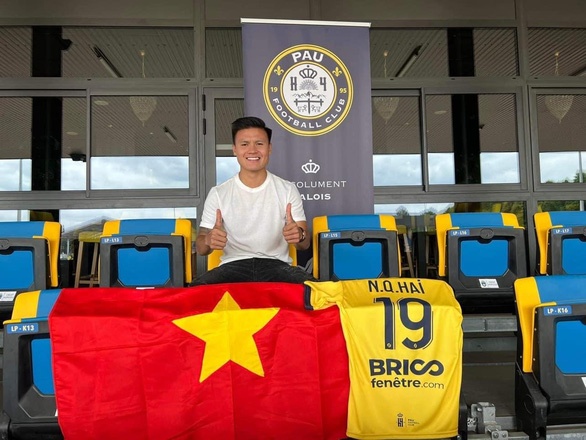 The verified Facebook page of Pau FC, headquartered in Pau District, Pyrénées-Atlantiques Province, about 800 kilometers from Paris, published a post to introduce Hai to fans following his successful completion of a medical examination.

“Vietnam international offensive midfielder (45 selections) joins Pau FC for the next two seasons. He will wear Pau FC’s No. 19,” the Facebook post reads.

The Vietnamese midfielder’s two-year contract with Pau FC, which includes the option to extend for a third year, makes Hai the first Vietnamese player to sign for a professional club in France.

“The first important part has been completed. I have officially become a member of Pau FC. I’m very happy and proud,” Hai wrote on his verified Facebook page on Wednesday.

Pau FC are a small club, competing in France’s Ligue 2.

Its Nouste Camp home stadium’s capacity is at 4,031, the least among the 19 clubs in the French second division for the 2022-23 season.

They also have the lowest salary budget in Ligue 2, with a total of €2.93 million (US$3.05 million) paid to the players last season, according to Vietnamese media.

Pau FC are scheduled to play friendly matches against Toulouse Club on July 12, Angouleme on July 15, and Niort on July 23 before competing against En Avant Guingamp in their opening Ligue 2 match at Guingamp Stadium on July 30.

Hai became a free agent after bidding farewell to Hanoi FC in March.

The Vietnamese club offered Hai a new contract, but he remained steadfast in his desire to play football abroad.

He is among Vietnam’s current crop of young players widely regarded as a ‘golden generation.’

None of this generation, however, have managed to shine abroad.