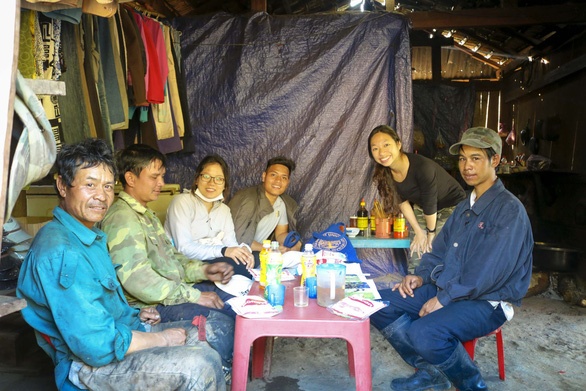 GreenViet Biological Diversity Conservation Center, a Vietnamese animal rights and environment group founded in 2012, has been conducting research and raising people’s awareness of the biodiversity in the regions.

Its members, many of whom are young people, try to reach locals’ hearts and help them engage in environmentally conscious behaviors.

Their efforts are focused on conserving the red-shanked douc population, a primate species indigenous to Son Tra Peninsula in Da Nang.

Though its founders have doted on the doucs as the main beneficiary of their conservation drive, the members still pay attention to how to cushion the ecosystem and wildlife elsewhere from harm.

Apart from conducting scientific research which aims to lay the groundwork for their preservation drive, the group is active in community education activities on wildlife protection, which they believe are instrumental to their success in the long run.

Over the years, the group has organized hundreds of field trips, during which they pitched tents on mountains, ventured into forests to snap photos of the endangered species, and worked hard to talk locals out of eco-harmful habits.

The group’s journey to promote environmental protection awareness and get local residents actively engaged has never been smooth sailing, though.

These youths are poking their noses into others’ business, according to the locals in Da Nang, Quang Nam, Khanh Hoa, and Kon Tum..

According to Duong Thi Mai Ly, one of GreenViet’s project coordinators, different cultures have more or less pro-environmental beliefs.

The group members also run into countless difficulties trying to get their message across people from ethnic minority groups, who have difficulty speaking in the official language and cherish their long-standing hunting and tree felling practices.

Changing personally-held beliefs and attitudes about environmental issues, however, may not guarantee corresponding changes among these ethnic people.

Though they can persuade residents to sit down and listen to how alarming the wildlife situation is and how badly their actions are needed, it has never been easy to shift their deep-rooted livelihood practices toward sustainability, Ly added.

“The people there kept dismissing our advice as good for nothing as it had never occurred to them that the seemingly boundless natural resources may end up depleting without the right behaviors,” she noted.

The team’s hard-earned successes finally came as residents and agencies in the localities they have been through have shown encouraging changes in attitudes and begun shifting from hunting and felling trees to farming and growing forests.

With GreenViet’s help, their farms and acreages have also become more environmentally friendly.

For the past decade, GreenViet has organized hundreds of research activities, educational seminars and nature exploring trips, which are conducive to awareness promotion and sustainable development.

In one of their surveys conducted with 42 organizations working in this field across the central and Central Highlands regions as part of their Vietnam Wildlife Conservation Fund, up to 52 percent of these organizations are running youth clubs for pro-environmental activities.

The rest are operating as non-governmental, non-profit, and community-based organizations.

Only 24 percent of the organizations surveyed boast an operation seniority of 10 years or more.

Funding is a major hurdle.

“Community-based organizations such as women and farmers societies are mostly funded by the local governments,” Ly said.

“Funding for youth organizations, which mainly comes from the members’ own budget and crowdfunding, remains limited.”

For a steady source of funding, the team has kick-started the project ‘Establishing a funding foundation for biodiversity protection and environmental sustainability in Da Nang City, Vietnam,’ or the ‘Conservation Fund’ project for short.

With a vision to 2023, the project, implemented by GreenViet, Gustav-Stresemann-Institut (GSI, Germany) and co-funded by the Delegation CCP of the European Union to Vietnam, aims to establish the Vietnam Wildlife Conservation Fund in order to mobilize funding sources and increase the capacity of local civil society organizations, focusing on biodiversity conservation and environmental protection initiatives in the central and Central Highlands regions, according to GreenViet’s website.

The hardship the members face can never poison their hearts.

“There are several months on end when GreenViet staff work without pay,” Ly shared.

“In order to operate in the long run and bring about sustainability, it’s vital to protect environment and biodiversity conservation organizations.”

The center began with just five members, led by Tran Huu Vy, now its director; and Dr. Ha Thang Long, a representative of the Frankfurt Zoological Society, an international conservation organization established in 1858 with headquarters in Frankfurt and Main, Germany.

Starting with projects dedicated to protecting endangered doucs, GreenViet has expanded their scope to conservation of rare gene pools, education and promoting awareness of the sustainable environment.

Their reach and impact have been huge, spanning from Quang Nam, Thua Thien-Hue, Kon Tum to Binh Thuan and Nha Trang.

The organization has won notable recognition for their ceaseless efforts, including the Vietnam Environment Award for their outstanding contribution to environmental protection in 2014-16 conferred by the Ministry of Natural Resources and Environment; Certificate of Merit for remarkable contributions to the Da Nang City Union of Science and Technology Associations in 2012-17; and Certificate of Merit awarded by the Da Nang City People’s Committee for successful implementation of a project called ‘Da Nang, an Environment-Friendly City.’

Why gender equality is the key to healthy ageing

Administrator - 1 October, 2020 0
In a relatively short time, Covid-19 has devastated the lives of millions globally. For hundreds of millions more the toll wrought by the pandemic could have lasting effects for decades.

Tet in the times of pandemic: muted celebrations for Vietnamese diaspora...