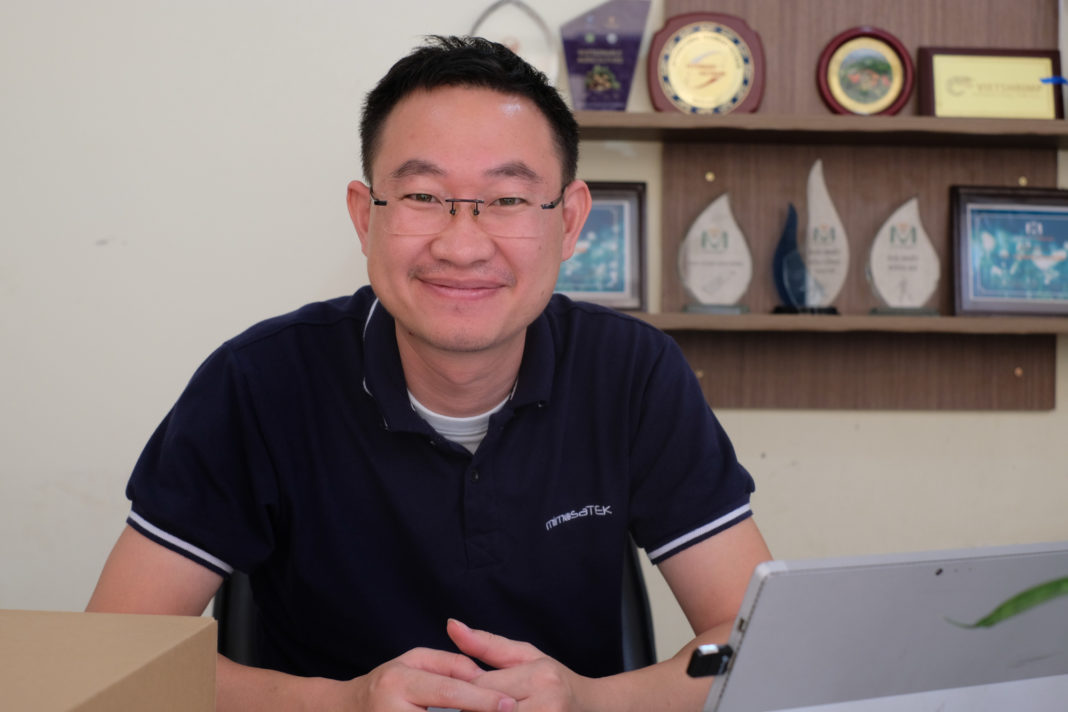 MimosaTEK aims to build an ecosystem including both input and output from local farmers’ agricultural products by integrating technology into farming.

When Nguyen Khac Minh Tri, 38, joined some of his friends working on a strawberry farm in his hometown of Da Lat in the Central Highlands, about 234 kilometers from Ho Chi Minh City, the first problem he faced was how to water and fertilize the plants properly.

“I found out the farmers were doing farming qualitatively. Their farming techniques were based mainly on personal experience or the advice from the shop owners who sell pesticide or fertilizer,” said Tri.

“That’s what led me to get interested in precision agriculture, using technology to systematize and quantify the input factors in farming.”

When Tri believed he had figured out the answers to all these questions, he decided to abandon his job and launch an agricultural technology (ag-tech) start-up called MimosaTEK.

Starting out with just two people, MimosaTEK has created and mastered a number of ‘made in Vietnam’ technological solutions over the last six years, including sensors to monitor moisture levels of the soil, automated control systems, automated plant watering systems, and automated fertilization.

“MimosaTEK’s ideology is digitalization, taking advantage of the automated devices to improve productivity and optimizing resources to decrease production costs,” he added.

The data, which is collected and analyzed by the system, will be transferred to the farmers’ smartphones, suggesting recommendations which the farmers can use to decide what their crops need.

MimosaTEK has also combined its technological solutions with other digital services.

For example, the start-up collaborates with the Dutch company Eurofins Agro to maintain and improve soil fertility, as well as using IBM algorithms to optimize the analyses of weather data collected from the start-up’s own IoT (Internet of Things) system.

“In fact, [Vietnamese] farmers often receive advice from fertilizer providers while not aware that the soil quality and fertilizer requirements are different from one farm to another,” explained Minh Tri.

With the results from the soil quality analysis, MimosaTEK will consult the farmers, help them map out the appropriate usage of fertilizers for each kind of soil and plant as well.

“This helps them to save at least 30 percent of the cost in comparison with the old method of using fertilizers [intuitively],” Tri said.

According to Lan Anh, the co-founder of MimosaTEK, the start-up has ventured into material supply area management.

Showing a box of ripe bell peppers, Anh said that they only need to be washed with water before eating because the level of pesticide residues in them is within safety limits for consumption.

“These are products harvested from a demo farm. We seek buyers for agricultural products and work with big buyers who have their own processing plants to sign annual contracts in order to help the farmers to secure stable prices,” she said.

In the field of material resource management, MimosaTEK carries out a number of models at the same time.

In some cases, they enter into a contract with the farmers, under which the latter will do the farming by themselves.

The start-up will support them with technological solutions and give them advice on improving their farming practices to meet the requirements of the buyers.

In other cases, MimosaTEK builds demo farms where the start-up’s members work as farmers to make a conceptual model of the demo farm and transfer it to local farmers after perfecting the model.

In Tri’s opinion, the biggest problem in Vietnam’s supply chain is that big buyers fail to manage the farmers and monitor the related farming process but rely on cooperatives or procurement companies.

“It’s a big issue to effectively manage a material supply chain, which needs to be involved from the beginning of the farming process,” said Tri.

“We join from the preparation phase, setting up the standard farming practices to which the farmers should follow. We also support the farmers with technology including sensors, applications, and automated devices, and provide them with advice to meet the buyers’ demands,” Tri added.

Apart from monitoring the usage of fertilizers and pesticides, MimosaTEK is also testing models for limiting such usage by leveraging natural deterrents and creating biological barriers.

“We would like to build a model that combines technology with biology. At the moment, the products grown by this model of farming have no pesticide residue or have it at a much lower level in comparison with the rules and requirements for importing into the European Union according to the test results,” Tri told Tuoi Tre (Youth) newspaper.

Founded in 2014, MimosaTEK was listed by CBInsights as one among 100+ global enterprises contributing to the future of agriculture.

It was one of ten companies in the world that was awarded the ‘Securing Water for Food’ prize from USAID in 2017 for its water retention system using IoT.

The company is based in the Information Technology Park at the campus of the Vietnam National University-Ho Chi Minh City in Thu Duc District.

Vietnam hands over two wanted criminals to US

Garbage is piling up around Hanoi

The UK – heading in a new direction

Administrator - 18 March, 2020 0
As a new era ushers upon us, the U.K. is determined to pursue our goals on diplomacy, innovation and sustainable development.

Eking out a living as pig porters in Vietnam

Administrator - 3 August, 2020 0
It might seem like a strange job, but being a piglet porter is an important source of income for a group of elderly women in Que Son District, Quang Nam Province, located in central Vietnam.