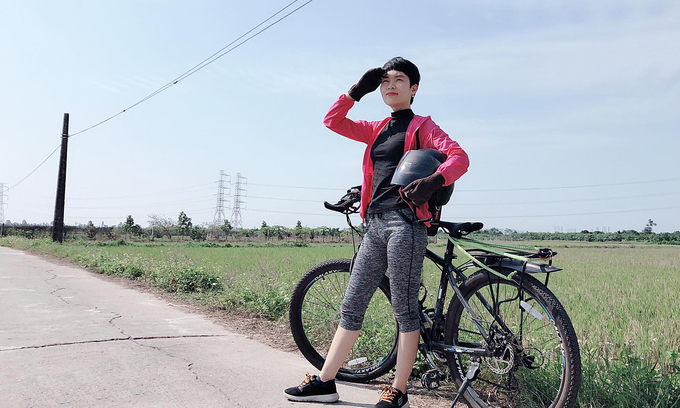 Thu Huong retires from her career as a banker at 27. Photo courtesy of Huong.

Thu Huong is financially independent and has retired from her career as a banker at 27, joining the retire early movement around the world.

One morning in July Huong woke up at 4 a.m., spent an hour meditating and another hour doing yoga and then sat on the balcony watching the sun rise.

She cycled through a village in northern Hung Yen Province’s My Hao Town and went to the market to buy some fruits.

After an afternoon nap she read books, planted saplings and started making handicrafts.

But on a lazy day she just lies in bed watching movies and listening to music.

“I’ve been enjoying retired life for more than three months. I have no money pressure and don’t need to hustle. I just simply do things I like,” she says.

She has few possessions and savings of VND100 million ($4,300). She used to be a banker and also worked as an insurance agent.

Like many young graduates, she also spent many years working late at night to improve her material life. Thanks to that, she saved enough money to build a house for her parents, buy gadgets and furniture and go on long vacations.

“But I had to work 12-14 hours a day even on weekends. Every night I would come home and eat simple food.”

When she was around 25, she began to ponder a lot about “the meaning of life,” read books prolifically and decided to explore her inner self.

She had an epiphany: people find life tough because they are attached to and want to hold on to many things.

In mid-2019 Huong left Hanoi to move back to the capital’s neighboring province of Hung Yen and began her early retirement life. Every day, she goes to bed at 9 p.m. and gets up at 4 a.m.

A vegetarian, she cooked all her meals by herself, and they cost only VND10,000 each time. She gave up motorbikes and began to cycle or walk to work.

Living a slow-paced lifestyle, she is happier as she lives every moment of the present and tried not to do more than one thing at a time.

In March, she decided to retire at the ripe old age of 27.

When she shared her early retirement plans on social media, many people congratulated her on courageously following a path few would dare to. But some others said she was “selfish for not being responsible toward her family and contributing to society.”

The early retirement trend first appeared in western countries a few years ago as a protest against the hustle and bustle of the industrial lifestyle, and began to spread to other parts of the world.

Retiring does not lead to a “doing nothing” lifestyle but allows people to do what they like, including charity, while still generating some income.

Three months into retirement, Huong earns money from making handmade goods and teaching Chinese. But unlike in the past she does it now because she truly likes it.

Nguyen Thanh Trung, 33, of Da Nang retired while managing three companies. He says he suffered from scoliosis and had to be hospitalized for treatment after trying to carry a heavy object in 2019.

At the hospital, a 65-year-old woman lying on the bed next to him said she has spondy litis because she spent years working as a chief accountant.

“What is your current occupation? Please don’t forget to take care of your health and don’t let it come to retirement since you might end up in the hospital and won’t be able to enjoy life,” she said.

Trung recalled: “During that period, my boss suddenly died because of a stroke. Before that, my father and younger brother died, a classmate died, a man close to me who I often talk to also died. I started to understand that life is short.”

Trung switchs to become a vegetarian and has gotten rid of previous health problems such as congestive inflammation of the stomach lining, gastric reflux, autonomic nervous system disorders and others.

He still has an online job that brings income, besides running an ornamental plants business and and handmade item shop.

In HCMC, 30-year-old Cu Ngoc Tuyet Xuan is enjoying her early retirement without losing her strong passion for working.

She spends a lot of time doing her favorite things such as reading, writing, acquiring new knowledge, and painting. She works as a psychologist for 3-5 hours a day to earn an income though not when she is tired or uninterested.

“The year 2020 taught me that it is time for me to give up my job as a teacher and live only for my dreams, and so from the beginning of this year I have taken a break from all classes.”

For many of the early retirees their retirement has been bumpy: They are judged by people and at the same time have to learn to live frugally by giving up many comforts.

One of them said: “We as humans have lived focusing on external happiness for too long. Now we should choose to look inwards since this is also a source of happiness, yet less expensive.”

Huong said: “My biggest responsibility is to live happily. And the best way to show my filial piety to my parents is to help others by spreading my own peace and happiness to people around and help them find inner peace, not just by giving them a lot of money.”

Administrator - 24 July, 2021 0
Phan Minh Quy, a physically disabled resident from Ninh Binh Province, Vietnam, is uplifting his local community by providing jobs and skills training for those with special needs.

Administrator - 4 November, 2020 0
Secretary Pompeo in July stated that the US government is committed to making the next 25 years of the US-Vietnam ties “a model of international cooperation and partnership.”

Administrator - 19 October, 2020 0
Two Vietnamese women repatriated from Russia and a Malaysian man brought to the country as an expert worker have tested positive for COVID-19, taking the total number of patients in Việt Nam to 1,113.