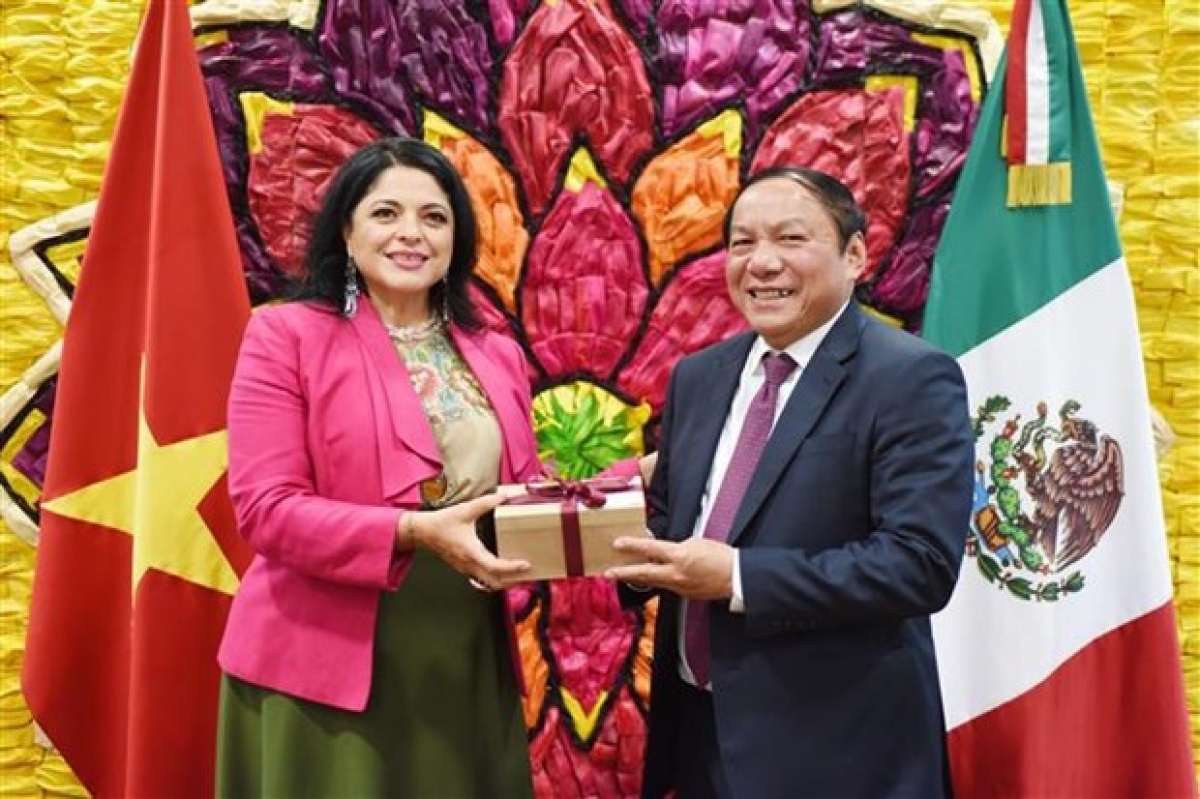 Vietnam is fully aware of the role of culture as a driving force for sustainable development and commits to carrying out and achieving the 2030 Agenda, the minister underlined.

To capitalise on the country’s diverse cultural heritage and young and creative human resources, the Vietnamese Government has exerted efforts in building strategies, particularly the one for the development of cultural industries by 2030, he said, adding that Vietnam is also among the first countries to pilot the culture index to review cultural databases, policy frameworks and development programmes.

The culture sector currently accounts for 3.6% of Vietnam’s GDP, Hung said, adding that improving working conditions and welfare of cultural workers will be a priority in policies of Vietnam and the world in the time to come.

Meeting with UNESCO Chairperson of the Executive Board Tamara Rastovac Siamashvili, Hung expressed his hope that UNESCO will continue to support Vietnam in heritage conservation and the revision of the Law on Cultural Heritage.

For her part, Siamashvili spoke highly of Vietnam’s responsible participation in and contributions to UNESCO.

The minister also met Mexican Secretary of Culture Alejandra Frausto Guerrero to discuss measures to strengthen bilateral cultural cooperation, during which the sides affirmed the special role of culture for both countries, shared their priorities in the building and implementation of cultural policies and measures for socio-economic development and the realisation of sustainable development goals.

They agreed that culture and art exchange will serve as a driving force for the Vietnam-Mexico ties, and foster solidarity, friendship and mutual understanding between peoples of the countries.

The Mexican government and Secretariat of Culture wants to boost ties with Vietnam in culture-art and particular fields such as cinematography, exhibitions and archaeology, Frausto Guerrero stressed.

The two ministers consented to sign a cooperation agreement as soon as possible in sectors of mutual concern, as the two countries are looking forward to bringing the relations to a comprehensive partnership in the coming time.

Meeting with the head of the culture and cinematography committee of Mexican Chamber of Deputies, Carlos Francisco Ortiz Tejeda, Hung proposed the Mexican side uphold cultural values of President Ho Chi Minh in Mexican localities where the late President’s statues are placed, and increase cultural exchange through holding film weeks and annual exhibitions of Vietnam and Mexico.

He welcomed Mexican filmmakers to Vietnam for filming, and invited Mexico to send films to attend the sixth Hanoi International Film Festival slated for November.