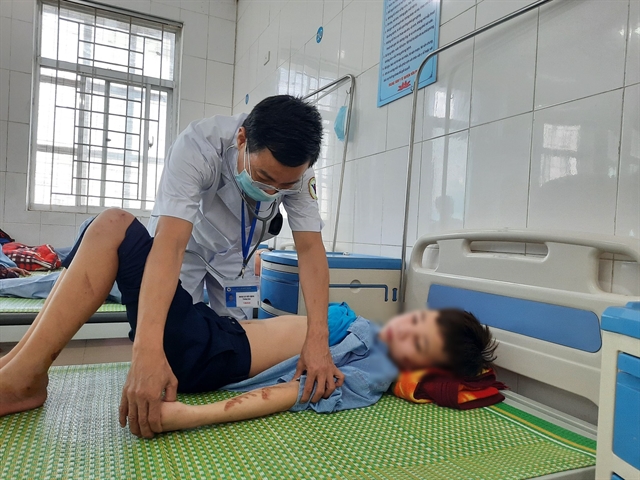 At the Yên Phong District’s police headquarters, the boy said he was originally from a rural part of the central province of Quảng Ngãi.

Back in September, he was brought to Yên Phong by his own older brother to work as ‘helper’ at a bánh xèo restaurant owned by 44-year-old Nguyễn Thị Ánh Tuyết from Quảng Ngãi Province, and her 45-year-old husband Ngô Thanh Vũ from HCM City.

The child told police he was beaten so many times during work there that he decided to run away on Saturday.

After some questioning, police moved him to Yên Phong District medical centre to be examined and so far, his physical and mental conditions appears to be stable.

Voice of Vietnam newspaper noted that according to a worker at the restaurant, they had to work from 7am to 4am the next morning, and their living conditions were terrible.

They had to sleep on the cold ground without any beds and they had had no decent meals since working there, making do with the leftovers from customers.

It is reported that Tuyết herself is taking care of her baby, who is younger than 36 months old.

The police said the woman claimed her beating of the boy was because he was stealing money, and eating from the orders.

On Monday morning, representatives from Bắc Ninh’s labour and social affairs department have come to the medical centre to see the boy and present him with gifts.

A report will be sent to Bắc Ninh People’s Committee before December 25 this year, it said.

This article was originally published in VNS

Vietnam and the US celebrate 25th anniversary of relations

Administrator - 16 October, 2020 0
The US is committed to supporting Vietnam in dealing with war legacies, boosting economic and trade ties and cooperation in education, healthcare, science-technology, etc.

How has Vietnam contained the second wave of Covid-19?

Administrator - 2 October, 2020 0
There has been little sense of being forced to do anything as most of people in Vietnam take care of themselves and others.