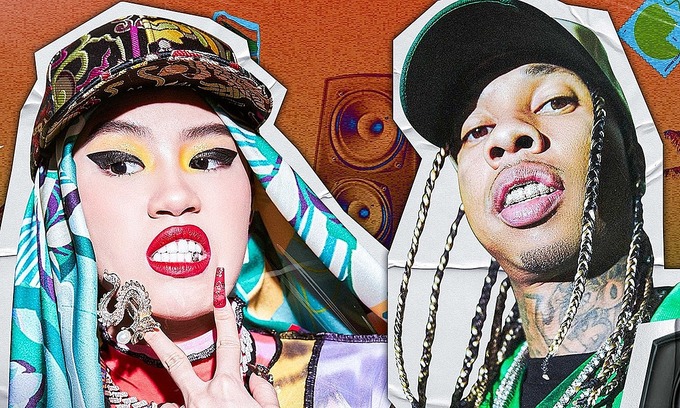 She collaborated with local producer KAIX for the ‘2 Phut Hon’ (KAIX remix) version, which became a mega hit worldwide and even topped the most searched song globally on Shazam, an app that can identify music and TV shows by listening to a short sample of their audio, in December last year.

The remixed version was later released under Dutch electronic music record label Spinnin’ Records, and has raked in over nine million views on YouTube since its premiere in January.

After hearing the viral hit, Tyga reached out to Phao to collaborate with the 18-year-old artist.

On Friday Phao and Tyga’s ‘2 Phut Hon’ (Make It Hot) [KAIZ Remix] remake was released on both YouTube channels of Phao and Spinnin’ Records.

It has the of Vinahouse beat, a house music style developed in Vietnam’s bars and clubs and Phao’s forte.

For the 31-year-old Tyga, this meant he had to switch from his usual style of rap and try house music.

Both artists’ teams said the remake is the first of many collaborations between the two.

It is known that the duo are producing and making a completely new track, which is expected to be released next year.

Check out Phao and Tyga mixtape below:

Administrator - 22 September, 2021 0
NDO – Italian poet Emanuela Rizzo, an art enthusiast whose poems have featured poetry in Italy and some other countries, has recently translated works by several Vietnamese poets and published them on the famous poetry site “Future Poetry” in Italy..

Administrator - 22 September, 2021 0
The tour is expected to nature love for the nature among people, typically kids.

Administrator - 21 March, 2020 0
Thanh Huynh, a renowned local designer, is poised to unveil her latest fashion collection during London Fashion Week 2020, which is scheduled to take place in the UK on February 16.

Administrator - 18 March, 2020 0
Phuoc Tich ancient village, about 35 km north of Hue City, is located on the bank of the O Lau River, which separates Thua Thien-Hue and Quang Tri province.