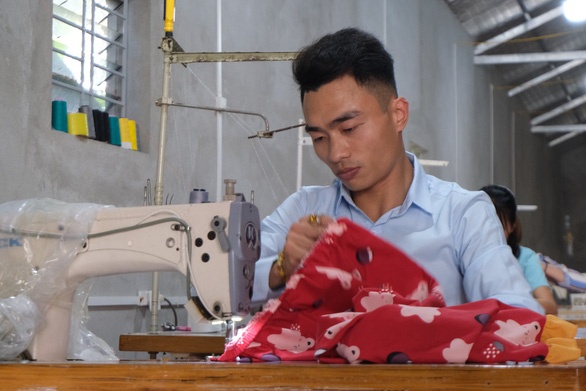 Quy has dedicated much of his lift to helping people with disabilities improve their quality of life through employment and social integration.

In addition to serving as the deputy director of the province’s Vocational Training, Job Development, and Support Center for the Disabled, the 31-yar-old social entrepreneur also runs a textile factory where he provides employment for 12 disabled employees.

As a baby, Quy came down with a fever that left him with partial paralysis and the inability to walk. As a result, the first nine years of his life were spent crawling.

His parents visited dozens of major hospitals trying to find him help, but their search was in vain.

Because of his disability, he did not start school until her turned nine.

Shortly after, his parents found an experienced doctor who was able to perform a surgery that enabled him to regain some of his mobility.

“When I first learned how to walk, I was so shaky that I’d fall over from the slightest touch,” Quy recalled.

“I often suffered leg contractures and had to put a sack of sand beneath my legs to stretch them.”

Quy dropped out of school after finishing the ninth grade and soon began looking for work in order to provide for himself.

At 19 years old, with just VND500,000 (US$22) to his name, he left his hometown in Ninh Binh Province for Nam Dinh Province, approximately 32 kilometers away, to work in industrial processing zones but was consistently denied work due to his pronounced limp.

Eventually, he landed a job as a painter at a decorative wood workshop.

It did not take long before Quy realized that working as a day laborer did not provide a stable income.

He returned to his hometown where he learned how to sew at a textile vocation workshop for physically challenged people.

What Quy found most challenging about the learning process was using his feeble feet to operate the pedal sewing machine.

It took him six months to master the machine and make his first shirt – a keepsake he still holds on to.

Eager to find a decent-paying job, the young man again found himself struggling in a job market that felt prejudiced against people like him.

Despite his skills, his applications were all turned down due to his disability.

“My parents would tell me to stay home. They said I couldn’t become somebody,” he shared.

“My parents can provide for me while they are still around, but what about after they’re gone?

“I knew I needed to give it my all and stand on my own feet to protect my future.”

Luck finally smiled on him when he landed a job at a Korean garment enterprise.

After working at the company for two years, Quy found a job at an even larger business where he was able to prove his capacity and gain experience in the textile industry.

A man on a mission

According to Quy, even in 2021, the job market is staked against disabled people.

“How can such a man be good at his work?” and “How on earth could we employ such a man?” are just a few of the comments he has faced.

Hoping to change the narrative, Quy is determined to help his community earn fair treatment in a job market that often works against it.

Quy got his chance to make a difference when a friend offered to help him launch a garment workshop where he could provide training and employment for those with special needs.

With an initial investment of VND800 million ($34,700) he scraped up from his own and his family’s savings, Quy put his workshop into operation last October, well aware the outbreaks of the novel coronavirus (COVID-19) pandemic within the country in 2020 could badly hurt his business.

“Looking back at what I’ve been through, I’m set on providing training and stable jobs to people with disabilities,” he said.

Among them is Mai, a hearing- and speaking-impaired 20-year-old, who cannot read or write and has never ventured out of her neighborhood.

After just a few months, she was able to transform from a shy girl to a skilled worker who can churn out products with ease.

Since its launch in October 2020, during a year which saw many textile and garment enterprises make large numbers of workers redundant to cope with the COVID-19 impacts, Quy’s business has found itself a group of loyal customers and a steady flow of orders from now until the year’s end.

Looking at what he has been achieving so far, he modestly said there is room for improvement.

For his future plans, the young man hopes to work with more members of the physically challenged community to help them achieve self-empowerment.

Administrator - 22 September, 2021 0
The tour is expected to nature love for the nature among people, typically kids.

Administrator - 22 September, 2021 0
Young artists have come up with unconventional and refreshing ideas integrated with a personal touch to portray the unique beautiful traits of Hanoi.

Vietnam claims 1.5 percent of GDP loss due to natural disasters...

Administrator - 21 November, 2020 0
The Ministry of Natural Resources and Environment reported that different kinds of natural disasters in Vietnam create around 1.5 percent of GDP loss each year. This rate is predicted to grow in the future unless there are sound national solutions to cope with climate changes soon.