Nhat Tan, Thang Long, Chuong Duong and other bridges have played crucial roles in connecting traffic between peripheral districts to the West of Hanoi with the downtown as well as between the capital city with other localities that contributed to the cultural, political and economic exchanges among the regions.

Nhat Tan Bridge was opened to traffic in January 2015. This is the first suspension bridge crossing the Red River in Hanoi with a total length of 8,900 meters with the main part of 1,500 meters long.

The project cost a total of more than VND13,600 billion (US$587 million), funded by loans from the Japan International Cooperation Agency (JICA) and the reciprocal capital from the Vietnamese government . 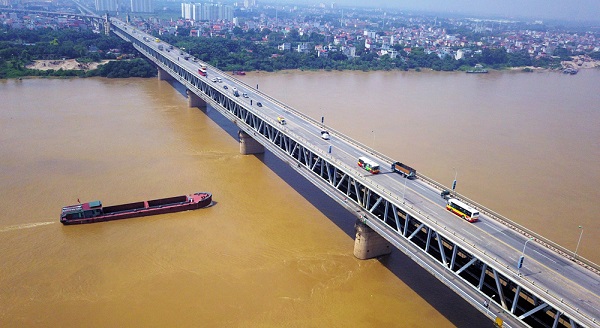 Thang Long Bridge, constructed from 1974 to 1985, crosses the Red River at the km6+300 in South Thang Long National Highway.

The bridge, which runs from Noi Bai International Airport to Hanoi’s downtown, is considered a millennial construction that epitomized the Vietnam – Soviet Union friendship.

The steel truss bridge is 3,250 meters in length including two tiers with 25 main spans and 46 spans for railway and primitive vehicle lines.

Each lane of the bridge is 3.5 meters in width for primitive vehicles. The lane in the middle of the bottom tier is 11 meters wide, constructed for railway and paths for bicycles and motorbikes. The upper tier includes a 21 meter wide path for cars and two lanes for pedestrians.

Chuong Duong Bridge, which was built from 1983 to 1986, is the first of its kinds to be designed and constructed by local engineers. The bridge crossing the Red River links Long Bien district with the city center.

The construction is 1,230 meters long with 21 spans including four lanes for two-way commuting which is 5 meters wide each. 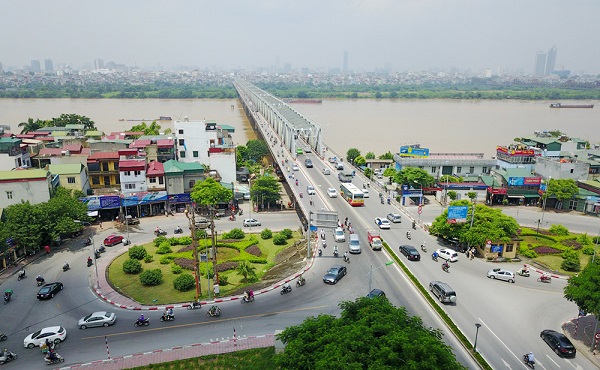 Under the initial design, the bridge was intended for the circulation of 7,000 vehicles daily, however, it is now bearing loads of three- to four-fold the initial estimate. In the late 1990s, Chuong Duong Bridge became overloaded, so a roundabout was built at its southern end to tackle congestion. 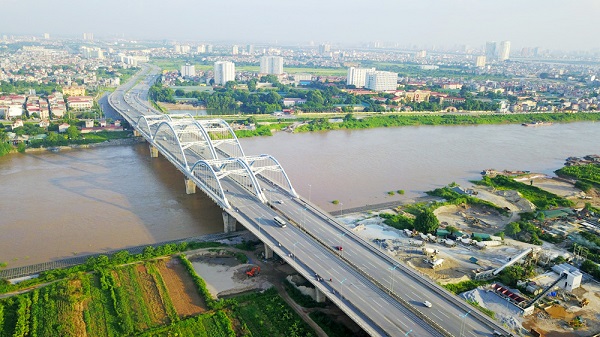 Dong Tru Bridge, which opened to traffic in 2014, is 1.1 kilometers in length. It crosses the Duong River in Long Bien and Dong Anh districts.

The VND882 billion (US$38 million) bridge has eight lanes with a total width of 55 meters. The bridge consists of three main spans, of which two 80 meter long spans and 120 meter long mid-span are built with concrete-filled steel arches, the first being applied to this technology in Southeast Asia. The bridge helps facilitate communication from Hai Phong city to Noi Bai International Airport.

Vinh Tuy Bridge connects Long Bien district with Hai Ba Trung district. The construction was inaugurated in 2010 with a total investment of VND3.6 trillion (US$155.4 million).

The width of the bridge, which was 19 meters, has been recently expanded to 38 meters in the second phase of construction, making the Vinh Tuy the widest bridge in Vietnam.

The bridge helps shorten the route from the city center to National Highway 5 toward coastal localities of Hai Phong, Quang Ninh around three kilometers, reducing the load for Chuong Duong and Long Bien bridges.

The historical Long Bien Bridge was built by the French from 1898 to 1902. It is the first steel-made bridge crossing the Red River, connecting Hoan Kiem with Long Bien district.

The bridge, considered the historical witness of Hanoi, was the world’s largest bridges at its time of construction, and one of the most important projects in the region.

Long Bien Bridge, which comprises of the railway, roads and pedestrian roads, is severely downgraded and needs reparation constantly to keep alive the railway from Hanoi to the North of Vietnam.

Thanh Tri Bridge, opened to traffic in 2007, is one of the longest and widest reinforced concrete bridges in Vietnam, and also one of the most innovative. The bridge starts from the crossroad of National Highway 1A at Phap Van (Thanh Tri) and its end intersects Highway 5 in Sai Dong (Gia Lam). Hanoitimes

Administrator - 13 August, 2020
0
NDO – The second Muong Ethnic Cultural Festival will be held from October 29-31 in the north-central province of Thanh Hoa.

Administrator - 18 June, 2020
0
More than 80 European dancers will take part in a street carnival as part of the Sam Son Sea Festival 2020, scheduled to take place between June 26-27 in the north-central coastal province of Thanh Hoa.

Calendar of the Black Thai in Vietnam

Administrator - 18 March, 2020
0
The Black Thai in Son La province base their calendar on the phases of the moon.