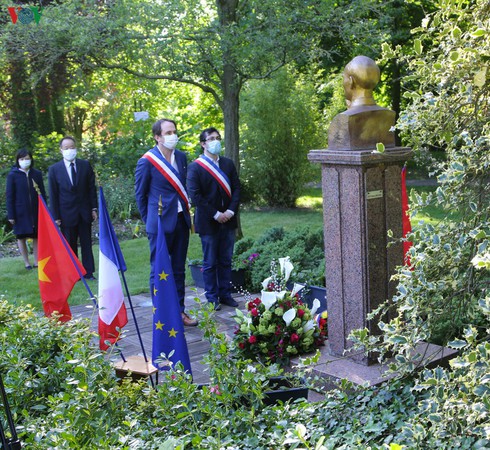 Addressing the event, Ambassador Nguyen Thiep affirmed that President Ho Chi Minh was a great leader who led the Vietnamese people to victories on the road to socialism. Honoured by the United Nations Educational, Scientific and Cultural Organization (UNESCO) as the Hero of National Liberation and the Great Man of Culture of Vietnam, President Ho is not only the peacemaker for the Vietnamese people but also contributes to the struggle for national liberation worldwide.

The diplomat highlighted President Ho’s revolutionary cause, especially his first overseas trip to France in his quest for national salvation, as well as his contributions to establishing relations between Vietnamese and French peoples.

The relations between Vietnam and France have stood the test of time and developed well over the years within the framework of the strategic partnership established in 2013, thus promoting cooperation between the two countries’ localities, Thiep noted.

Montreuil mayor Patrice Bessac spoke highly of President Ho’s great role and contributions to the cause of national liberation not only in Vietnam but in France and elsewhere around the world.

“We respect President Ho, one of the important figures who helped put an end to colonization and decolonization,” said Patrice. “It’s our honour to attend today’s ceremony to commemorate his birthday. As the mayor of Montreuil city, I reiterate France’s desires to strengthen friendship and cooperation with Vietnam.”

At the ceremony, Ambassador Thiep and Vietnam Airlines representatives handed over 1,000 face masks to the Montreuil government to support the French city in the battle against the novel coronavirus.

Nghe – A Mascot in Vietnamese Culture

Administrator - 18 March, 2020 0
Adoring ancient Vietnamese culture, Nguyen Thi Tu Anh spent over 20 years collecting 100 Nghe animals (a fictional creature with a lion-like head, a long tail and a dog-like body) of diverse sizes and colours which were made from stone, pottery, wood, bronze and earth.

Administrator - 25 July, 2020 0
An exhibition on the ASEAN Community and Vietnam’s seas and islands was opened in the border district of Bao Lac, Cao Bang province, on July 24.