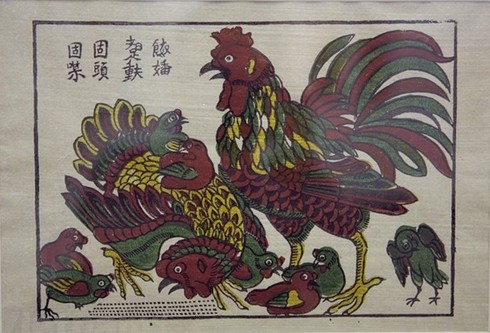 The Ministry of Culture, Sports and Tourism was assigned to sign the dossier as regulated.

Meanwhile, the Vietnam National UNESCO Commission will coordinate with the ministry to complete all necessary procedures to send the dossier to UNESCO before the end of this month.

Dong Ho village, formerly named Mai village, in Song Ho commune of Thuan Thanh district, northern Bac Ninh province, is known as the cradle of one of the most famous folk painting genres of Vietnam.

The paintings vividly reflect the traditional agricultural society, along with the life and practices of rural Vietnamese people.

In the past, there were 17 clans in Dong Ho village engaging in the trade. After 1945, folk painting genres like Dong Ho, Hang Trong and Kim Hoang gradually fell into oblivion.

In 1990, some local artisans began collecting old paintings and woodblocks in an effort to revive the Dong Ho painting genre.

At present, making Dong Ho folk paintings has been recovered and has its values upheld in the contemporary life. It was recognised as part of the national intangible cultural heritage in 2013.

Vietnam’s traditional Lunar New Year through the eyes of foreigners

Administrator - 21 March, 2020 0
Tet, Vietnam’s traditional Lunar New Year, has impressed many foreigners who admit that the holiday helps them understand the close bond of family members and the meaning of family get-togethers during the first days of Spring.

The Hobby with Mobylette in Vietnam

Administrator - 18 March, 2020 0
The Mobylette, sometimes called Moby, is a unique model of motorbike that looks similar to a bicycle. Since this type of motorbike was introduced  in Vietnam in the 60s, it has been a favourite of Vietnamese motorbike collectors  who go to great lengths to collect and make the ancient motorbikes more eye-catching.