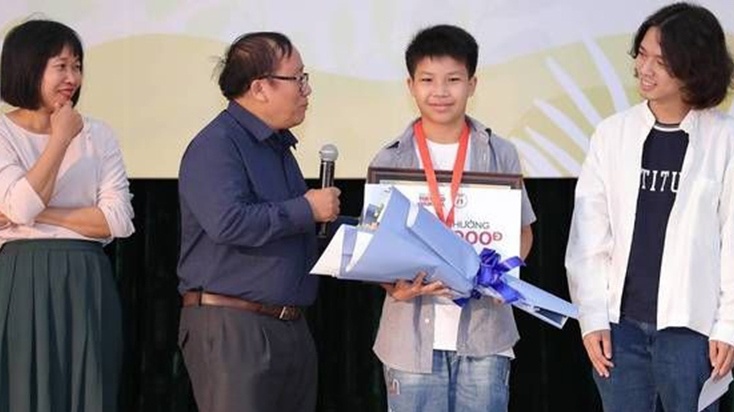 In addition to the Vietnam National Children’s Literature and Art Awards project launched this year by the Vietnam Writers’ Association in collaboration with the Department of Performing Arts under the Ministry of Culture, Sports and Tourism, there are many other prestigious awards: the “De Men” (Cricket) Award for Children, the contest entitled "Doa Hoa Dong Thoai" (Bouquet of Children’s Stories Contest), and the annual Good Book Award have made a mark on the area of literature for children.

The The Thao and Van Hoa (Sports and Culture) Newspaper has just announced the results of the second "De Men" Award. In 2020, young writer Cao Khai An (born in 2009) won bronze prize in the "Khat Vong De Men” (Cricket Desire) Award for Children. Over the past two seasons, "De Men" Award has attracted a significant number of works created by children themselves or those created for children.

The contest jury said that there are works for children created by children themselves that have not yet won prizes, but can be printed into books with high quality, rich and vivid content. Particularly in terms of the second De Men Award, there were six entries by children who passed the preliminary round, including two manuscripts of 200-page fantasy novels by a third-grader and a sixth-grader.

The sixth-grader’s novel was written in English, then translated into Vietnamese, illustrated by his classmates, only one part of a four-part series in progress. The "Doa Hoa Dong Thoai" Contest, organised by the Kim Dong Publishing House in collaboration with the "To Quoc" Fatherland Online Newspaper and a sponsor from Japan since 2018, also attracts many young writers from primary school age.

In 2020, first prize in the Primary category was presented to Phan Ngoc Dai Ngoc, a 3rd grader, from the Doan Thi Diem Primary School, Da Lat City. The highlight of "Doa Hoa Dong Thoai" contest is its exchange programmes. The guests are famous writers, who are involved in children’s literature. They share many good experiences, answering questions related to the writing profession from young children, spending time guiding and evaluating the works of the children.

According to experts, one of the major weaknesses in the works for children is that the writer still imposes an adult’s perspective on the child’s world, not putting themselves in the mind of a child in order to understand and share. Faced with that fact, more and more young writers are composing literature, bringing a vivid sense of the child’s world to the rhythm of literary development. According to publishers, in recent years, the appearance of young writers with works designed for others their age has had a positive effects.

As teenagers, the writers know how to express the language and identity of their homeland and people, creating a unique feature in their works. For example, author Cao Khai An with the work entitled "Chuyen Cua Bap An Mo Va Xom Doi Rom", won the first "Khat Vong De Men” Award for Children 2020. The work captivated readers by its innocence, flexibility, rustic and charming language. These elements will not be found in literature works for children translated from abroad.

In addition to books written in familiar genres, such as: short stories, medium stories, long stories and novels, at present, young writers are also interested in trying out books on culture, history, discovery, travel, skill picture books and short stories. With the advantage of composing for readers of their own age, youg writers have an opportunity to promote their abilities in observing and creating stories that close to life and childhood.

From the above, it can be seen that the field of literature for children is vibrant again with movements in line with the trends of the times, arousing sources of knowledge and human values, aiming to direct children to a greater source of inspiration and stronger creativity .