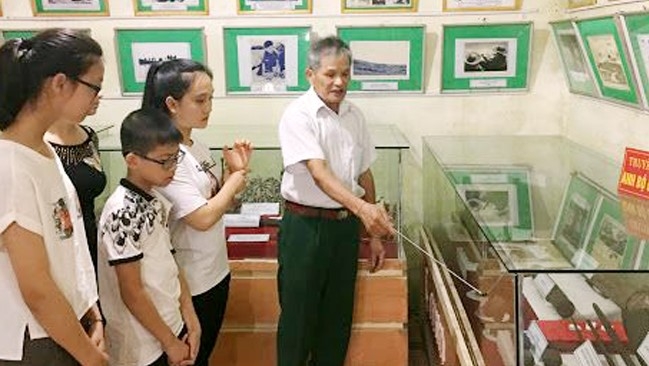 During these days marking the Wounded and Fallen Soldiers’ Day (July 27), delegations of visitors quietly lined up to pay tribute to heroic fallen soldiers who sacrificed their lives during the resistance wars for national independence. Covering an area of around 2,000 square metres, the museum is divided into two sections with ten galleries. On display are over 5,000 documents, photos and artefacts that reflected the fierceness of the two resistance wars against French colonialism and US imperialism as well as highlighting the undauntedness and faithfulness of revolutionary soldiers in the prisons of the colonialists, imperialists and their henchmen. The guides at the museum are former soldiers who were imprisoned by enemies.

It takes over one hour for Nguyen Dinh Quoc to take a bus from Dai Tu street, Hoang Mai district, to the museum to work. He was formerly a vice captain of a train carrying weapons to the southern battlefield in 1970. He often receives and introduces artefacts to officials and students who want to learn about their historical tradition. Quoc said the museum’s members have placed the statue of fallen soldier Truong Van Ton in a central position for worship. Fallen soldier Ton was born in 1939 in Hung Yen province and laid down his life when he was 12 years old. He is one of the youngest martyrs that were bestowed the “Hero of the People’s Armed Forces” title in 2011. Beside Le Van Tam and Kim Dong, Truong Van Ton were typical examples of thousands of brave and patriotic young people.

Quoc said the museum preserves many valuable documents and artifacts about Vietnamese armed forces and soldiers as well as the war crimes of the enemies. In addition to objects collected and restored by the museum’s management members, the museum has received many artifacts from organisations, individuals and relatives of heroes and fallen soldiers.

The museum’s director, Lam Van Bang, was a former prisoner arrested by the US imperialists and witnessed his comrades suffer the torture whip of the enemy. Therefore, he decided to form a place to preserve the war memorabilia to pay tribute to comrades who sacrificed their lives. Bang traveled all over the country and searched for war relics from his companions in arms and the martyrs’ families. Initially, the museum was just a traditional house for revolutionary soldiers imprisoned during the wars, Later, when more visitors came and there were more artefacts, the house was upgraded into the museum of Imprisoned Revolutionary Soldiers. The display areas were arranged in different themes such as “the hell on earth”, outdoor artifact area, the area for photos and models of tortures and evidences of war crimes.

The museum, the first private one of this kind in Vietnam, was formed thanks to the efforts and aspirations of veterans. It has significantly contributed to preserving many artefacts and educating younger generations about their revolutionary tradition. The museum has coordinated with the public museums, such as Air Defense – Air Force Museum, Vietnam Military History and Bac Ninh provincial Museum, to organise exhibitions on the occasion of major holidays. However, after 14 years of operation, a number of items in the museum have deteriorated, causing many difficulties in managing, preserving and displaying the artefacts. According to Lam Van Bang, the museum’s managers aspire to maintain and promote its activities. Therefore, it is crucial to have funding for the restoration, repair and expansion of several items, including the upgrade of the display area and the area for welcoming visitors.

Com – a specialty of Hanoi’s Autumn

Administrator - 6 December, 2020 0
The Hanoitimes - After great efforts to preserve a traditional craft, the brand of Com lang Vong (Vong village's young sticky rice" has been officially recognized with a trademark certificate.

Administrator - 28 June, 2021 0
Kissing is not only a great way to express your love but also a beautiful form of communication. In order to honour the power of kissing, International Kissing Day or World Kiss Day is celebrated every year on July 6.