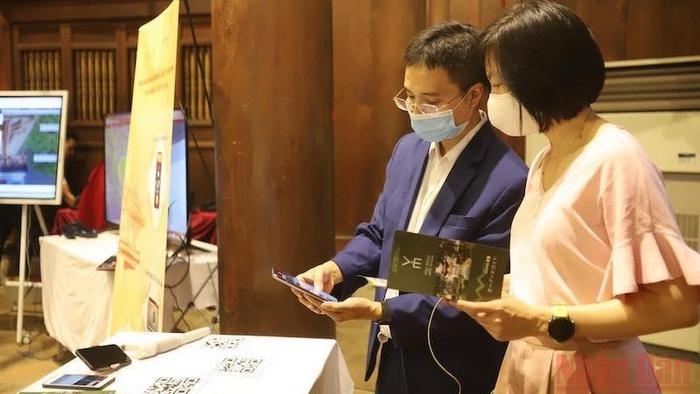 Van Mieu-Quoc Tu Giam (Temple of Literature), is one of the most popular relics and tourist destinations in Hanoi and the country at large, attracting millions of visitors every year.

Assoc. Prof., Dr. Dang Van Bai, Vice President of the Vietnam Cultural Heritage Association, said “education about heritages would be more effective if we know how to use digital technologies,” as the technologies help create virtual reality products allowing visitors to explore what they want to know. He urged relevant agencies to actively and creatively develop products using Industry 4.0 industries.

Deputy Director of the Hanoi Department of Culture and Sports Pham Thi My Hoa, for her part, said technology-based tours are suitable to the current context, meeting demand of cultural explorers since Van Mieu-Quoc Tu Giam and other relics and museums in Vietnam are still suffering from impacts of the COVID-19.

During the event, the Van Mieu–Quoc Tu Giam Culture and Science Centre conducted a 3D Mapping demonstration at Thai Hoc Courtyard, paving the way for the launch of night tours to the relic.

Built in the 11th century during the Ly Dynasty (1010 – 1225), Van Mieu-Quoc Tu Giam is among the most important Confucian symbols in the country.

The complex consists of Van Mieu, a temple dedicated to Confucius as Confucianism used to be popular in Vietnam in feudal times, and Quoc Tu Giam, the first national university of the country.

It taught disciples on the Confucian way of life and revered Chu Van An, one of Vietnam’s most respected scholars. Between 1076 and 1779, Quoc Tu Giam educated thousands of talented men to serve their country to the best of their abilities.

Administrator - 26 November, 2020 0
With a view to highlighting the role of males in society, November 19 is celebrated as International Men's Day.