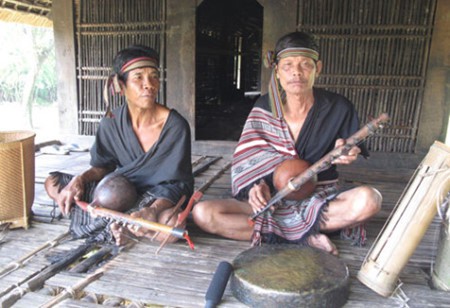 Like other ethnic groups in the Central Highlands, the H’re have created many tales, poems, songs, and musical instruments.

They have used bamboo tubes and dry gourd to make such musical instruments as the brook, the Talia panpipe, the Popel jew harp, the Radang two-string zither, and the Ching Kala bamboo gong.

Folklorist Vi Tan Bao said, “At New Year’s celebrations, wedding parties, and community festivals, the H’re gather around a fire, drink wine, and sing Ka choi and Ka leu songs accompanied by gongs and other musical instruments. The songs praise their home villages, life, and love. They sing to share their feelings about life and work.”

Kaleu and Kachoi are dual singing genres for women and men. Ka choi has many melodies and songs and the singers can improvise lyrics to match the situation.

They sing to express love, make friends, or discuss sensitive matters which are difficult to talk about. A dual singing session may continue all night.

Lately some traditional festivals and customs of the H’re have been fading. Fewer and fewer H’re people have a profound knowledge of their musical instruments and folk singing.

Elderly Dinh Ngoc Su of Son Sa district, Quang Ngai province is famous for knowing many H’re songs and building and playing musical instruments. He learned the songs from his parents.

H’re songs have moved won the heart of the audiences at national folk singing festivals. Artisan Dinh Ngoc Su was invited to perform in the Republic of Korea.

Administrator - 21 March, 2020 0
A festival featuring the ancient sport of ‘Vat Cau’, a game which involves men wrestling over a ball, took place in the village of Thuy Linh in Linh Nam ward of Hoang Mai district in Hanoi on January 30, with the aim of bringing the local community together through a traditional sport.

Administrator - 27 May, 2020 0
A photo contest themed “Impressive Vietnam amid COVID-19 fears” is open to all entries until July 10 and is set to play a part in efforts to encourage all citizens to join the country in the battle against the novel coronavirus (COVID-19) epidemic.