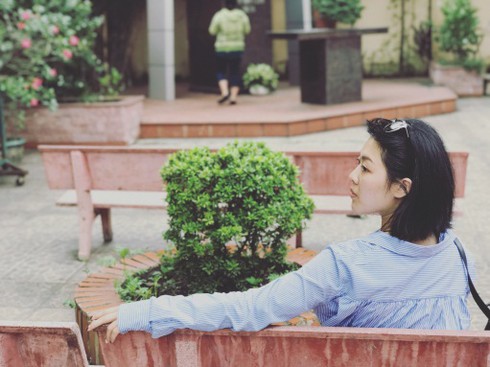 The tale has it that after the Vietcom fought and liberated the south from US occupation. The people of Saigon voluntarily chose to change the name of the city to “Ho Chi Minh”, the great leader of the Vietcom army, in order to show their gratitude for the communist liberation of the south.

Today, this historically prominent city is exerting its youthful and energetic vibes to millions of tourists every day from all around the globe. It is extending its international recognition in unique and modern ways to re-illustrate its past glory and prosperity.

My first impression of the city came from my living experience. As young and budgeted foreigners, I decided to book my accommodation through Airbnb, a new internet platform for travellers to find cheap and comfortable accommodation hosted by local people. Then, I came across an apartment called ICON 56.

The accommodation was beyond beautiful. Not only was it clean, modern, and comfortable, it also offered up-scale services like rooftop swimming pool, scenic balcony views, and gym. Most surprisingly, such a luxurious apartment only cost about US$36 ($48CAD) per person per night! In Canada, a similar apartment would cost more than triple of the price.

The living condition of the house struck us as a surprise. In the eyes of many foreigners who have never set foot on this soil, South Vietnam still represents the region deeply devastated by bombing during the Vietnam / American War. In reality, the trace of the War had been deleted permanently in HCM City.

The rising skyscrapers and the popularization of western technologies have already permeated ordinary people’s lives, making it a welcoming and fascinating place for everyone to visit.

After a good night of rest, i ubered  to the most credible and famous travel agency in Vietnam, the Sinh Café, to book tomorrow’s tour for Cu Chi Tunnel. There are many Sinh Cafés in HCM City, but some of them are fake ones that do not provide the same level of service.

Address for the real Sinh Café:

HCM City is a vibrant and modern city, and the Vincom shopping centre simply reiterated its new identity. The Vincom centre was the largest shopping mall in HCM City, and it was composed of two separate buildings directly facing each other.

Within the mall, you may find popular international brands such as Zara, Mango and Nine West. Additionally, you will find popular Asian brands, such as O HUI, in the cosmetics section, and famous Brazilian brand, Vascara, in the shoe section.

The internationalization of Vincom maximized its popularity among both the local people and foreign tourists. Due to its enormous size and the inclusion of many Asian brands, the spacious shopping mall provided us with shopping experiences that paralleled or even exceeded North America.

After navigating Vincom shopping centre, I took a fifteen minutes-walk to a lively and youthful place: the Street Food Market. At first, my attention was drawn by three Vietnamese music performers who were singing my favourite song by Ed Sheeran, Thinking Out Loud.

After I marched inside the market, however, food was the only thing that’s on my mind. Although the performers were authentic locals, their ability to speak and sing English versus truly amazed me. I almost forgot that I am visiting a faraway South-eastern Asian country if the loud Vietnamese conversation between the nearby vendors did not reach my ears.

Internationalization not only happened on the singing stage, but took place in every corner of the market. This crowded and busy market contained a great variety of street food from different all around the globe. Inside you may find Middle Eastern kebab, French baguettes, American hamburgers, Korean tteokbokki (rice cake), Vietnamese pho and delicious sugarcane juice… The different variants of the food could easily overwhelm any visitor to this market, and it was truly a paradise for all the foodies around the world!

The second day of the trip was heavier comparing to the first. I went on the half-day (morning) tour to Cu Chi Tunnel: an incredible network of underground tunnels built during the Vietnam War to provide Viet Cong (Vietnamese soldiers and communists) supplies and hiding spots.

The tunnel had significant strategic importance for the Viet Cong, since it offered a safe place to store their ammunitions, family, food and supplies. Even hospitals were inside the tunnels to help the wounded soldiers and pregnant women during the war.

Two aspects of the trip genuinely shocked me as a foreigner, and the first aspect was the sheer size of the tunnel. The Cu Chi Tunnel was 121km long in total, and it was constructed by manual shovels and basic tools.

Given those circumstances, my appreciation for this complex immediately grew. The site of this magnificent man-made complex still echoes the braveness of the Vietnamese soldiers when confronted by foreign invasions today.

The second aspect that shocked me even more was the scarce and poor condition to live inside the tunnels. Although important activities, such as eating, resting, and healing were conducted inside the tunnel, the conditions inside the tunnel was far from satisfactory. I was able to crawl under a tunnel open to tourists for only 2 minutes.

Despite the short time, the darkness and pressure had consumed me. My heart rate accelerated exponentially, and breathing became substantially harder once I began crawling. A two minute adventure in the tunnels almost gave me a heart-attack, let alone living in the tunnel for hours and days.

The experience of the tunnel made me realize the reason for Viet Cong’s success in the war. What defeated the Americans were not advanced weaponry or mysterious blessings, it was the strong will of the Vietnamese people awoken by the desire to unite their own country that sealed the fate of the war.

Additionally, no heating or air conditioning systems were built inside the tunnels and most of the tunnels had no source of electricity. According to a Viet Cong’s testimony, people in the tunnels had to live with poisonous centipedes, spiders, scorpions and different kinds of insects.

Sickness such as malaria was rampant among the soldiers, and all of them were infected with intestinal parasites. The dangers within the tunnels were already grave, let alone the constant bombing from the US forces.

Yet, about 4,000 people still managed to survive in the tunnels after the Americans finally surrendered in 1972. After knowing those stories, I think that the war was both a miracle and not. The determination and braveness that dominated the hearts of Vietnamese fighters was truly a miracle, since it fuelled them to endure extreme hardships and to fight the war until the last man standing.

On the other hand, their success was not a miracle, because their willingness to sacrifice for their country was significantly greater than the American counterpart.

After two days of tiring adventure, it’s finally time for us to return home. My plane ticket was from the budget airline, Vietjet. The round trip to HCM city only cost us around US$98 (VND2,238,339). However, the flying experience with Vietjet became a nightmare for me. The standard for carry-on and check-in luggage was much lower than the international standard. I ended up paying an extra US$17 (VND400,000) at the airport in order to check-in my small luggage bags.

The disappointment does not stop there. After I arrived at the boarding gate, I learned that my flight had been cancelled, and no explanation was given to the passengers about such cancellation. Eventually, my flight had a 3 hours delay, and the arrival time shifted from the original 20:30 to 0:15.

My unpleasant experience with the airline taught us the importance to check the online reviews before booking any plane ticket. Below is one of the most popular flight review website:

Besides the little disappointment at the airport, my trip to HCM city was a huge success. I tasted the youthful vibrancy in the street food market, walked through the elegantly modern Vincom centre, and experienced the rich history buried underneath the surface of Cu Chi tunnel. Two days was too short to get to know the city, and I would definitely be interested to pay another visit at the city in the future.

Administrator - 13 August, 2020
0
Vietnam reported no new COVID-19 cases between 6 pm on August 9 and 6 am on August 10, keeping the national count at 841, according to the National Steering Committee for COVID-19 Prevention and Control.

Administrator - 21 March, 2020
0
Vietnam has added 11 more cultural icons to the list of national intangible cultural heritage, according to the Ministry of Culture, Sports and Tourism.

Administrator - 18 March, 2020
0
Vietnam is one of few countries in the world that has an industry of farming and processing salagane nests. Khanh Hoa Province has the largest number of islands which are home to the salanganes and its products have been rated as having the best quality.