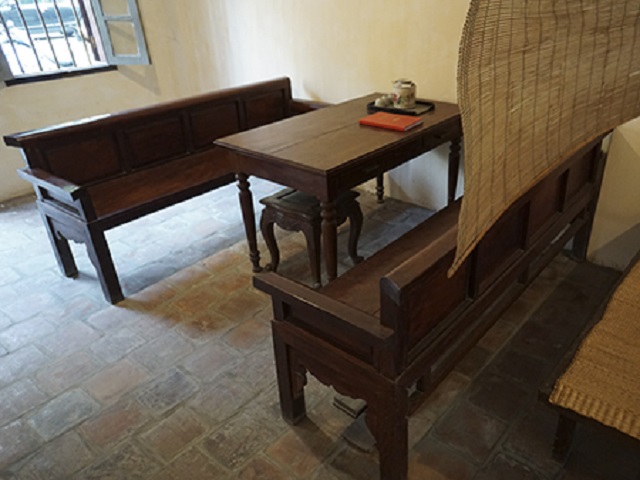 In 1929, the worker movement was developing strongly so the Vietnam Association of Youth Revolution needed the leadership of the proletariat. In the end of March 1929, the soldiers in Hanoi including Ngo Gia Tu, Nguyen Duc Canh, Nguyen Phong Sac, Tran Van Cung, among others met at the house No. 5D, Ham Long Street to establish the first Communist Party Office.

In 1964, the house was recognized as a historical and cultural relic.

The house is now kept as a souvenir house, remaining almost the same structure and furniture of the time. Together with other revolutionary historic houses in Hanoi, it contributes to the proud history of the Vietnamese revolution.

House No. 90 Tho Nhuom Street – Where the first General Secretary of the Party wrote the Draft of Political Thesis

The street of Hang Bong Nhuom (Tho Nhuom) was known as a “Western” street at that time. The house No. 90 has four floors with the villa style. There was a family living there with their employees.

In early May 1930, comrade Tran Phu, a Vietnamese revolutionary and the first general secretary of the Communist Party moved to live in this house. His room in the basement was six square meter room, enough for a bed with a window overlooking the street where he was able to see the main gate, notice everything outside and escape to the backyard when necessary.

Many meetings took place here until midnight and the comrades in the Standing Committee often slept right on chairs in the hallway. During the time of writing the draft of Party Political Thesis, comrade Tran Phu often sat on the floor and used his bed as a desk.

Historical house No. 48 Hang Ngang – Where Uncle Ho wrote the Declaration of Independence

Located in the Old Quarter, this house has a long and deep style of traditional “tube house” of the area. The house was owned by a wealthy couple Mr. Trinh Van Bo and Mrs. Hoang Thi Minh Ho, whose bourgeois family had sucessfully run a silk shop for many generations. Like many other Vietnamese, they were very patriotic. Before the revolution, this couple supported communist soldiers a lot, including financial sponsorship.

With the location in the center of the busy business district with many customers and passers-by, the house was soon chosen to welcome President Ho Chi Minh on August 25, 1945, he came from Tan Trao Town (Tuyen Quang Northern Province). The room on the second floor was used as his meeting room with the comrades in the Standing Committee.

Here President Ho Chi Minh hosted a meeting with members of the Party’s Standing Committee to prepare for the launch of the Provisional Revolutionary Government on September 2, 1945. On the table there was the typewriter that Uncle Ho used to draft the Declaration of Independence.

The four-storey building in No. 48 Hang Ngang Street has been preserved and ranked as the historical revolutionary relic.

House No. 8 Le Thai To Street – where President Ho Chi Minh lived the first days in the French war

The relic of the house is now no longer available so that it is not clear about its date. But as the house belonged to the Chief Justice of the Supreme Court Moocse (the Supreme Court of France in Hanoi) so it is regarded to be built in the 1920s.

Not long after the successful Revolution, Chiang Kai-shek led his army to the North of Vietnam to disarm the Japanese army. Hanoi was in a complicated situation and the house No. 48 Hang Ngang was no longer safe so that the house No. 8 Le Thai To Street was chosen for President Ho Chi Minh to reside in the early days of the war.

The house was where Uncle Ho and the Standing Party Committee worked from August 1945 to the end of 1946. There were many important decision and policies made at this house such as the first general election of the Democratic Republic of Vietnam on January 6, 1946; production increase to save hunger; nationwide education; activities against reactionary Vietnamese and French colonial return; preparation for the Fontainebleau conference in France.

In front of the house, there is a stele writing “The relic site of the House No. 8 Le Thai To Street Hanoi where was the secret residence and working place of President Ho Chi Minh from September 1945 to December 1946. Also here, many soldiers of the National Guard bravely defended the place, contributing to the victory of the army and people in the 60 day and night fight for defending Hanoi in winter 1946.”

Administrator - 6 March, 2021 0
A delivery man, 31, has become a real-life superhero after saving a two-year-old girl as she falls from the 12th floor of a 16-story building in Hanoi, Vietnam.

Administrator - 18 March, 2020 0
NDO – Around 120 objects highlighting the cultural diversity and identity of the X’tieng ethnic community are on display at an exhibition that opened at the Ho Chi Minh City History Museum on April 19.