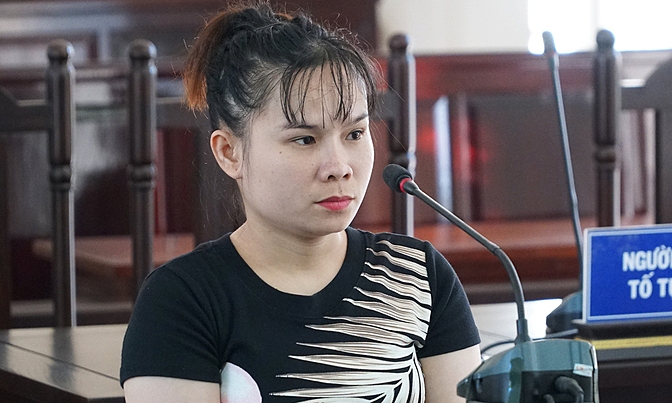 Nguyen Thi Ngoc Hanh, 30, was arrested on June 26 at Huu Nghi International Border Gate in northern Lang Son Province while returning to Vietnam due to the Covid-19 outbreak in China.

Charged with “human trafficking,” Hanh told the court she was unaware of having committed a crime and simply wanted to return home after the epidemic took hold of China.

According to the indictment, in 2017, Hanh was sold by her two creditors in Ba Ria-Vung Tau to a Chinese man in Fujian Province.

While in China, Hanh had met various local men wishing to marry Vietnamese brides. With the help of her 53-year-old mother Tran Thi Kim Cuc and two other accomplices, she subsequently tricked four women from Ba Ria-Vung Tau and Binh Thuan provinces into going to China, receiving VND15 million ($646.36) on the back of each successful transaction.

According to police, Hanh had first turned to trafficking herself in an attempt to pay off debts.

In May 2018, officers in Hanoi arrested Cuc and the two others at Noi Bai International Airport while attempting to transport the four Vietnamese women to China.

In October the same year, Cuc was sentenced to nine years in jail for human trafficking while her accomplices got jail terms of five and 11 years each.

In the first half of this year, Vietnam had uncovered 60 cases of human trafficking involving 90 victims.

The country has recorded over 3,400 victims of human trafficking between 2013 and 2019, over 90 percent women, children and those from ethnic minority communities, according to the Ministry of Labor, Invalids and Social Affairs.

Hundreds of thousands of women from Vietnam, Cambodia, Laos, and Myanmar have gone to China to wed local men, activists say. Some end up happily married, but many others suffer violence and forced labor.

This article was originally published in Vnexpress

Vietnam expects to receive 20,000 int’l arrivals from this month

Administrator - 17 September, 2020 0
The country expects some 20,000 international arrivals from mid-September with the reopening of international air routes.

IRED launches “The Story of Civilization” book series in Vietnamese

Administrator - 24 October, 2020 0
HCMC - On October 22, the IRED Institute of Education launched the “The Story of Civilization” book series by Will Durant and Ariel Durant, one of the most popular and successful book series about history, in Vietnamese.