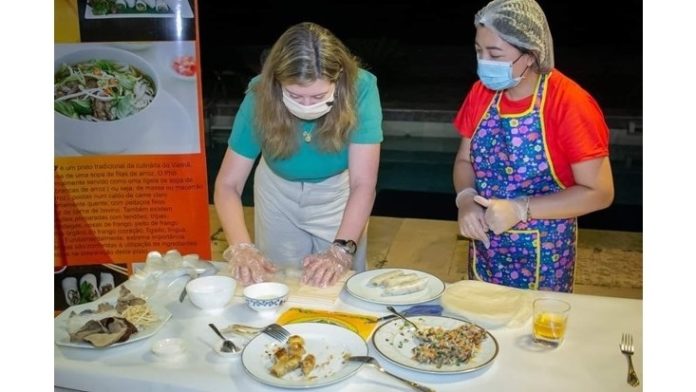 This event opened the Vietnamese food week in Brasilia held from April 21 to May 8.

The event was jointly organised by the Embassy of Vietnam in Brazil and the Patronal Union of Hotels, Restaurants, Bars and Similar (Sindhobar), Brasilia Bank, and the National Service For Commercial Education (SENAC), and sponsored by Brazil’s Tobacco Cigarette Factory (BAT).

Speaking at the ceremony, Jael Antonio Da Silva, President of Sindhobar said that this is the first time the Union has coordinated with the Vietnamese Embassy to organise a large-scale food festival across the capital.

Vietnamese food week promises to bring Asian food lovers new dishes with a variety of flavours and colours, made by the city’s chefs who have learned from Vietnamese Embassy members and rehearsed at Same Same restaurant.

In particular, customers can experience dessert with fried banana cake and egg coffee.

Paco Britto, Vice-Governador of Brasília, expressed his gratitude to the Vietnamese Embassy for the initiative in instructing chefs on how to make unique Vietnamese dishes, and to the Sindhobar for co-organising the ceremony, thanks to the sponsors for the programme and the enthusiastic participation of the restaurants.

He also emphasised that this event will not only connect the culinary culture in particular but will also bridge the cultures of the two countries in general, promoting mutual understanding and further cementing the friendship between the two countries Vietnam and Brazil.

For her part, Ambassador Pham Thi Kim Hoa affirmed that diners will experience a sense of delight when enjoying dishes with their own unique and very new flavours and colours, through which people in the Brazilian capital will understand more about Vietnamese culinary culture.

The festival is also a cultural cooperation activity to celebrate the 62nd founding anniversary of Brasilia (April 21, 1960 – April 21, 2022).

How to make trendy Korean Tteokbokki from Vietnamese rice paper?

Administrator - 15 May, 2021 0
Vietnam daily life spaces are kept vibrantly from the south to the north, from the countryside to the cities, and from the past to present.