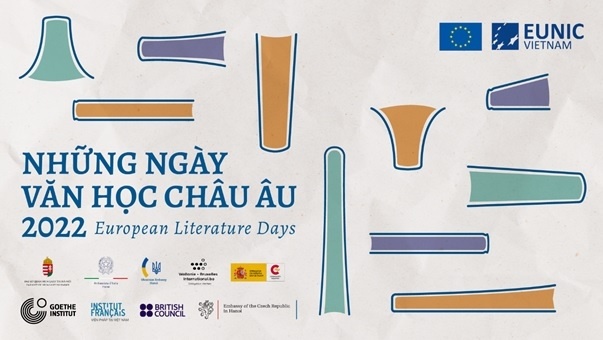 The European Literature will be presented through literary translations from Belgium (Wallonie-Bruxelles), the Czech Republic, the UK, France, Germany, Hungary, Italy, Spain, and for the first time – Ukraine.

Visitors can experience the writings at Casa Italia and the Goethe-Institut, and Nha Nam Book & Coffee on Nguyen Quy Duc Street.

Vietnamese writers will also be invited onto the stage of the European Literature Days to introduce their latest poems and prose to a curious readership. As always, European Literature Days are a marketplace, a platform for cultural exchange, and a fun place to be. The cultural exchange between Vietnam and Europe, with new creative products from Europe in excellent translation, will be the heart of the festival.

The festival will be opened simultaneously on May 5 at Casa Italia and the Goethe-Institut. The Embassy of Ukraine is a special guest at both the Literature Days and the Film Festival 2022. Ukraine will be launching the anthology of Ukrainian and world poems, translated and produced for the 30th anniversary of the diplomatic relations between Vietnam and Ukraine.

Readers will also meet authors of novels from the Czech Republic, France, Germany, Hungary, and Italy, some of them very popular and with a readership in Vietnam. From France Delphine de Vigan will present her psychological detective novel “D’après uns histoire vraie” at Nha Nam bookstore. From Germany internationally acclaimed lawyer-became-writer Bernhard Schlink who has gained a loyal readership in Vietnam will be present with his latest short stories. He will be followed by another lawyer-became-writer Ferdinand von Schirach. His book will introduce the Vietnamese audience to the European legal and value system in an entertaining and often thrilling way as no writer before has ever achieved. A new name for the international book market is German Viet-Kieu Khue Pham. She will be introduced through an excellent translation of an excerpt from her book to the Vietnamese readership by ZZZ Review. Last but least we expect online, the recipient of the famous German Book Prize and visiting writer to Vietnam in 2018, Julia Franck.

In addition, a round-table on Nobel Prize winner Kazuo Ishiguro will be held by Nha Nam publishing and the British Council. This event will be joined by the translators and an open a discussion on what is hidden in the ambiguities in Ishiguro’s works.

Administrator - 21 March, 2020 0
The third version of the Cho Lon kylin-lion and dragon dance festival is scheduled to take place between April 24 and 26 at the University of Physical Education and Sports in Ho Chi Minh City.