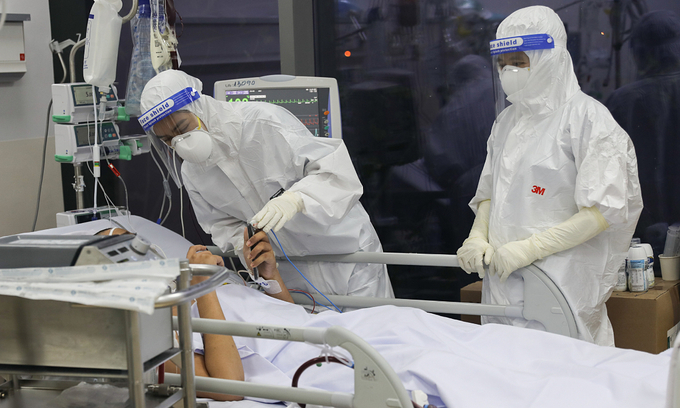 A patient at a HCMC Covid-19 treatment hospital speaks to family members. Photo by VnExpress/Quynh Tran

Nguyen Thi Que was already worried sick she could not reach her husband who was in a hospital with Covid-19.

When she received a call from a stranger who introduced himself by saying “I am a doctor…,” she was terror-struck.

Tran Van An, 28, her husband, had high fever and shortness of breath, and was admitted to a Covid hospital in Thu Duc City for treatment.

During his first week in hospital the couple were in touch every day through video calls and text messages. But one day Que, 27, called him dozens of times but he did not pick up.

Around 8 p.m. on August 6, her phone rang, and it was the doctor treating her husband. He informed her that An was in critical condition.

“After many days of not hearing from him, my family was extremely worried, knowing his condition was severe. We thought he had died.

“When I answered the phone, I was both happy and worried: I was glad he was still alive but worried about his well-being.”

X-rays had showed that his lungs were severely damaged, he had a low oxygen saturation level, and could not breathe despite receiving high-flow nasal oxygen, and required tracheal intubation and ventilation support.

The hospital could not guarantee he would survive.

“An is at risk of dying, and so the family should prepare mentally,” the doctor said.

Shocked, Que burst into tears and begged the doctor to somehow save her husband.

Fortunately, after more than 10 days of intensive treatment, he recovered and was discharged from the hospital three weeks ago.

Que says: “My husband was lucky to survive and return home safely. I still vividly remember the feeling when I received that call”.

An is one of thousands of seriously ill patients who have been placed on ventilators by hospitals.

Just like him, many others lose contact with their loved ones when they suddenly have respiratory failure or become unconscious.

An says he could not contact his wife because he suddenly could not breathe, his mind was hazy and his hands were shaking.

“When I was semi-conscious, I faintly heard the doctor call to tell my wife. I was grateful for that.”

Dr Tran Thanh Linh, deputy director of the Covid hospital set up at the Oncology Hospital 2 in Thu Duc City, says there are more than 660 patients most of them in critical condition.

The workload is heavy and medical staff focus on saving lives, but they also understand the anxiety patient’s relatives suffer, and so contact them to inform them about the situation, especially when a patient is in danger and could pass away, he says.

When patients are in a good enough state, medical staff let speak with their families on the phone since a few words of encouragement from a loved one can increase the mental strength of the patient, he says.

“But we do not have enough time to do this for all patients. Besides, some patients transferred from lower level medical facilities do not have their family members’ phone details in their files.”

Dr Ton Nu Bao Tran of the Covid-19 intensive care unit at the city’s University of Medicine and Pharmacy, says a patient requiring tracheal intubation is potentially close to dying, and so the hospital helps the patient talk to their family so that the latter can mentally prepare.

But many Covid patients who are transferred to her facility experience respiratory failure and need emergency intubation, and so doctors intervene first and later call family members, she says.

“This is not mandatory, but this may be the patient’s last call with their family. So we always try our best.”

Referring to the reaction of family members, he says most are psychologically prepared and believe the medical staff did their best, though some are shocked and find it difficult to accept the truth, and doctors need to comfort them.

At field hospitals treating Covid patients with mild symptoms, the rate of patients with severe respiratory failure is much lower than at the treatment facilities.

Dr Tran Van Khanh, director of a field hospital in Thu Duc City, says there has been only one case requiring intubation in the last few days, and so doctors were able to call family members in advance to explain.

Since patients are often fatigued and suffer shortness of breath doctors limit the duration of their calls or make video calls to avoid panicking the relatives.

The city, the epicenter of the fourth coronavirus wave that began in late April, has had 348,220 cases and nearly 13,500 deaths.

“When the hospital informed me that my husband was in critical condition, I was really panicked,” Que says.

“But I am still very grateful that the doctors and hospital staff helped me stay informed about my husband.”

“Hanoi in me” photo exhibition 2021 held in online form

​Vietnamese-American actress gets lifetime achievement award at US film festival

Administrator - 6 March, 2021 0
The downtown office will still play a critical role in future corporate real estate strategy. And social interaction drives productivity in specific areas of business and is central to corporate culture.