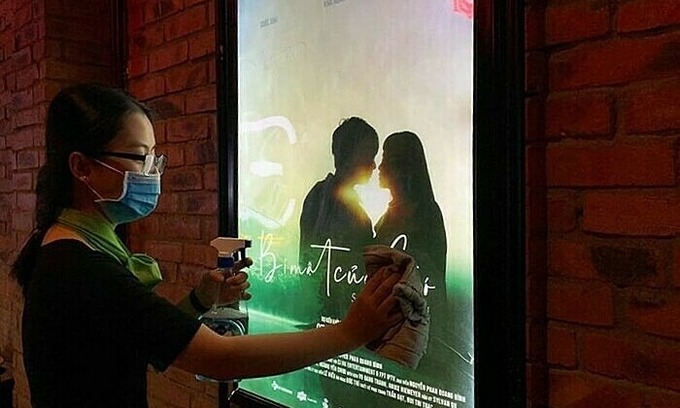 A staff member cleans a movie poster at a cinema in the central town of Hue. Photo courtesy of BHD.

To prevent the novel coronavirus from spreading, many entertainment venues in Vietnam have been closed, activities cancelled, placing artists in abeyance.

In HCMC, all cinemas and theaters, among other public venues, will be closed until the end of March.

Representatives of cinema chains Galaxy, BHD and CGV have stated they would refund money, in cash or via online payment, to customers who have purchased advanced tickets.

Besides its cinema complexes in HCMC, South Korean CGV has also closed its Hanoi multiplex at Trang Tien Plaza, plus four others in northern Quang Ninh Province. Since March 17, the National Cinema Center in Hanoi has also been closed.

In affected localities throughout Vietnam such as Hanoi, Hue, HCMC and Binh Thuan Province, authorities have shut down vulnerable public spaces and suspended entertainment activities.

Vietnam has recorded 85 Covid-19 cases across 15 cities and provinces, of these 69 have been confirmed since March 6 after the country going 22 days without a new infection.

With public venues and activities curtailed, people working in entertainment are taking a hit.

For the past week, cinema visits have dropped, dragging down domestic box office revenues. At one premiere screening of Hollywood action flick “Bloodshot” starring Vin Diesel on March 10, audience turnout was just a third of what could have been expected without the new coronavirus.

Audience turnout at Hanoi’s National Cinema Center in the first two months of this year dropped by about 40 percent and revenues, by 37 percent compared to the same period last year. At BHD muliplexes, revenues had also plummeted by 50-90 percent.

Worldwide, the movie industry is estimated to have lost at least $5 billion due to the  Covid-19 outbreak. In China, South Korea, Italy and India, cinemas have been closed and many entertainment events cancelled.

Global screenings of American blockbusters like “Fast & Furious 9”, “Mulan”, “A Quiet Place 2” and “No Time to Die” have all been rescheduled.

In Vietnam, the theater business isn’t doing any better. According to actor Thanh Loc from Idecaf Stage, the only drama troupe in HCMC still operational as of March 14, his venue closed down too, cancelling two plays, “Ac Nhan Coc” (The Cave of Evil) and “Muu Ba Tu” (Madam Tu’s Scheme) scheduled for March 15.

For Vietnamese artists, the novel coronavirus has taken a toll since Tet. “I’ve never seen such a meager turnout,” singer Thanh Duy recently told local media while referring to two Tet programs he took part in.

Though rigidly-scheduled contracted programs such as TV game shows still proceed as usual, many artists say music shows and plays have been either cancelled or re-scheduled.

For his part, singer Dan Truong had 12 shows cancelled in February, singer Erik had eight shows cancelled, and singer Bich Phuong had to delay her first live concert ever, scheduled for February 22.

For the past month, singer Quang Ha has had 21 shows cancelled, and bolero diva Le Quyen has also cancelled all of her March shows in the U.S.

According to singer Viet Tu, his income this season had dropped by as much as 90 percent compared to previous years. Artist Hoai Anh, director of a cultural event organizer, told local media since Tet, her company had ditched about 30 shows, losing tens of billions of dong (VND10 billion = $427,000).

An outpouring of frustration

Despite their willingness to slow down activities to help prevent the new coronavirus spread, many Vietnamese artists can’t help feeling sad and frustrated.

Vietnamese American artists such as southern folk opera singer Ngoc Huyen laments via her Facebook page how she missed rehearsing and prays for the outbreak to end.

For her part, singer Minh Tuyet writes that never before had she felt so nervous. If the show-less situation dragged on for the next several months, Minh Tuyet says she may have to sing at home and open a YouTube channel to earn her daily bread.

Here in Vietnam, singer Tuan Hung has also thought about performing online, posting a survey to ask if people are willing to pay a small fee to listen to his live streams.

Other artists have found more simple ways to fill up their time. Some have opted to stay indoors and record songs and shoot MVs to prepare for new releases when the outbreak subsides.

Others see these days as an opportunity to spend time on themselves and their families. Singer Thanh Duy for instance plans to carry out the personal plans he couldn’t execute earlier because of a hectic schedule.

Singer Nguyen Ngoc Anh finds joy in taking care of her two daughters, and singer Pham Phuong Thao, her orchard in the suburbs.

A special museum of agricultural tools

Administrator - 19 April, 2020
0
No new Covid-19 cases have been recorded in Vietnam Thursday evening, keeping the national tally of active cases at 91.

Administrator - 18 March, 2020
0
Vietnam’s central coastal city of Da Nang and Ho Chi Minh City were both named among the top 25 trending destinations in the world for 2020 by the world’s largest travel platform TripAdvisor.

Administrator - 18 March, 2020
0
NDO – After the time of hibernation in winter has passed, the Mai Anh Dao (Prunus Cesacoides) cherry blossoms are brightening Da Lat city. Many streets in the city, as well as the grounds of numerous old buildings, are illuminated with the pink colour of the flowers.

Administrator - 21 March, 2020
0
The worship of progenitors, a fundamental tradition of Vietnamese craft villages, expresses villagers’ gratitude for those who created jobs for locals.