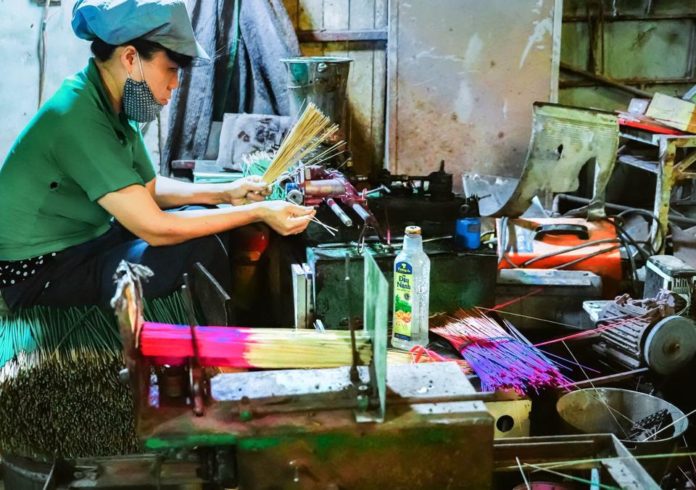 Visiting Quang Phu Cau Commune in Ung Hoa District, Hanoi a week ahead to Vietnamese traditional Lunar New Year, people will have a chance to admire the splendid beauty of the trade village. Everywhere in the commune, the villages’ roads glowed with pink and red colors of incense sticks.

Scented up for Tet

According to the elders in Quang Phu Cau Commune, the six villages in the commune including Xa Cau, Quang Nguyen, Upper Phu Luong, Lower Phu Luong, Cau Bau, Dao Tu have always been famous for incense-making.

“With a tradition of more than 100 years, these places are the major incense supply to the Northern region, providing the main source of income for thousands of local households,” they said.

As the Vietnamese traditional Lunar New Year festival is around the corner, residents of these famous incense-making villages are busily preparing for the most important holiday of the year – the Tet holiday.

Vietnamese believe that burning incense is the only mean of communication between this world and another world. Paying respect to the ancestors during the Tet holiday involves the use of incense, thus, the scented sticks are usually in high demand during this time of the year.

Every year in January when production ramps up for the festival, the villages of Quang Phu Cau commune become more bustling, and tons of sticks are produced to meet the country’s demand.

The whole space turns to be magically colorful, making it a must-see for lovers of scenic landscapes.

The beautiful frames of this incense-making village have also been introduced in a clip of  French  AFP news agency recently. “Quang Phu Cau Commune in Ung Hoa District, about 35 kilometers from the center of Hanoi, has a tradition of making incense sticks for more than 100 years,” narrated the video.

AFP also commented that this is a meeting point for local and international photographers. Images of incense sticks arranged evenly on the ground have been captured by talented photographers and helped them win many major photography awards.

In fact, the incense made by people in these villages has also been present in most of the provinces and cities around the country. Several types of incense have even been exported to China, India, and Malaysia, according to Nguyen Tien Thi, Director of Incense Cooperative in Xa Cau Village, Quang Phu Cau Commune.

“These products have been mainly sold in the domestic market and favored by a lot of customers, especially in the Northern provinces during the Tet holiday,” he told The Hanoi Times.

To prepare for this special event, Quang Phu Cau villagers are making major types of incense with different scents, including Tram (canarium albums), some herbs, cinnamon, and anise.

“This year we add new types, such as mugwort for Oriental medical treatment, eucalyptus for room sanitizing, and locust,” according to Nguyen Thi Tinh- an incense-making household in Xa Cau Village, Quang Phu Cau Commune, adding that her consumers are beginning to try the new products.

Every year, the days before Tet are the busiest time of villagers in the place. However, this year, under the impact of the Covid-19 pandemic, the production of the local incense is facing a lot of challenges.

“It is a bit difficult for this year’s incense-making season with a 30% decrease in sales compared to the previous year,” Thi told The Hanoi Times. “During the latest Covid wave and especially under Directive 16 of the Prime Minister, the cooperative had to cease operation for two months, as mass gatherings were banned.”

Thanks to the anticipation of the cooperative’ leaders, incense-makers are just partially affected. “Right after the last traditional Tet holiday, we accelerated production, so despite a break of three months, we still have enough output to supply to the market,” he stated.

According to Tinh, who has many years of experience in incense-making in Quang Phu Cau, because of the pandemic, she had to cut the number of employees to three or four at the workshop at the same time. On the other hand, they have to be updated on customers’ demand to produce the right amount of incense, which is not as large as before.

“Usually, year-end is our busiest time, but this year my family has to scale down production because our products are mainly sold at the fair which is not held this year due to restricting measures. We still continue production, but slowly,” she said.

Despite facing such difficulties brought about by the pandemic, the incense makers here are preparing to supply the market with a more diverse offer of incense in the upcoming Lunar New Year.

Perhaps, the burning desire of the people in Quang Phu Cau’s incense villages at present is that the pandemic will soon be under control so that they can rest assured to work and welcome tourists to visit the village and experience this unique century-old craft.

Administrator - 20 April, 2020 0
Giang Cao and Bat Trang villages make up the famous Bat Trang Commune in Hanoi’s Gia Lam District, one of the biggest pottery and ceramic production centers in Vietnam, about 10km from downtown Hanoi.