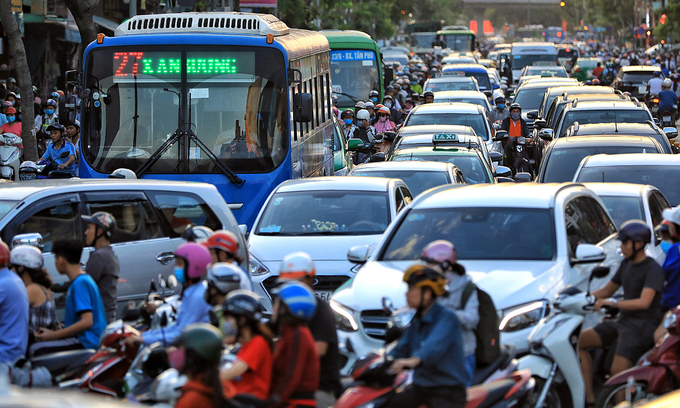 It’s 5:30 p.m. and Bui Thanh Truc uses her smartphone to book a 5-km Go-Viet ride from District 5 to an English center in District 3 where she works at night.

Truc used to be a loyal bus passenger at university but, at 25 switched to using ride-hailing apps for short trips.

“I used to get in trouble arriving late for class, busses being so slow, especially during rush hour,” Truc explained. “It felt like a nightmare. The bus inching forward, horn blowing continually while the assistant screamed at passing motorcyclists.”

Truc is one of many Saigonese who’ve turned ride-hailing apps for their convenience, prices only slightly higher than a bus ticket.

The struggle public buses face in the wake of increasingly popular ride-hailing services is a sorry tale.

Over 131 million commuters boarded public buses in the first eight months this year, down 13.2 percent against the same period in 2018, and meeting just 51 percent of this year’s target, officials informed a meeting this month.

Over the past six years, the number of bus passengers in HCMC decreased by more than half from 413 million in 2013 to 200 million last year. A report by property consultants Savills Vietnam last year said the rate of Vietnamese people using urban public transport is the lowest in Southeast Asia.

Grab has more than 175,000 driver-partners in 15 provinces and cities across the country, followed by rival Go-Viet with 100,000, mainly in Hanoi and Ho Chi Minh City.

“The development of ride-hailing firms like Grab, Go-Viet and Be has increased competition with buses in attracting passengers who travel short distances. The firms’ services are flexible and priced competitively,” said Tran Quang Lam, director of HCMC’s Transport Department.

“Now they not only prefer using their own motorbikes, but are in fact using their free time as motorbike-taxi drivers for ride-hailing firms such as Grab and Go-Viet that compete with public buses,” he added.

Another transportation specialist in HCMC said buses used to be the cheapest mode of transport, but that some ride-hailing firms now offer discounts that sometimes drag fares below those of buses. It only costs VND5,000 (22 cents) for a trip of less than eight kilometers via motorbike-taxi whereas a bus ticket was VND 6,000 (26 cents).

“If you look at factors such as convenience, punctuality, ability to avoid congestion, then ride-hailing services beat buses by a mile,” said the specialist.

The appearance of ride-hailing apps is not the sole reason for bus passenger decline. Traffic congestion and poor service quality has also contributed to the sorry state of affairs.

“Buses must be fast, punctual and safe. With schedules not guaranteed it’s understandable many passengers give up,” Trieu commented.

Official data shows that in the first seven months this year, 330,000 bus routes experienced delays of more than 15 minutes.

One of reasons Saigonese have waved goodbye to public buses is the poor attitude and behavior of some drivers and their assistants.

Truc used to be threatened by a female bus assistant because she apparently talked and laughed too loudly. The bus assistant said Truc could distract the driver with her behavior.

Phuong, who refused to provide her full name, has worked as a bus assistant over four years. She said job pressure often made her annoyed with passengers.

Linen Weaving by the Hmong in Dong Van

Administrator - 29 February, 2020
0
Thousands of tour guides in HCMC have been left with nothing to do as local and international tourists have canceled their tours for fears of a new coronavirus.

Administrator - 24 February, 2020
0
A banh mi restaurant in Hoi An that had wowed renowned chef Anthony Bourdain has opened a branch in Seoul.

Exhibition on Worship of Mother Goddesses in Hue opens

Administrator - 24 February, 2020
0
NDO – An exhibition, themed “The worship of Mother Goddesses in Hue" opened at the Hue Cultural Museum, in Hue city, on August 2.

Administrator - 25 February, 2020
0
The war in Vietnam has been over for nearly 40 years and many soldiers have returned home with unforgettable memories. One of them is Chu Lai, a prolific author who has not only won the people’s respect for his famous stories about war and the post-war era, but also for his dramatic stage and movie work.