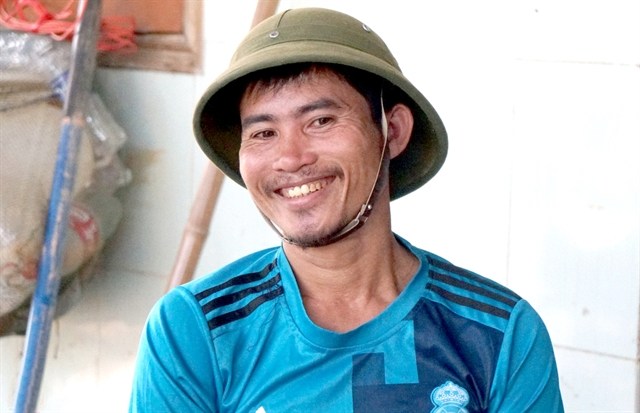 Residents have hailed the young men as heroes because together they saved more than 300 people from drowning.

It was 5pm on October 18 and Thành was fishing near his house when he noticed the water was rising rapidly, he recalled.

He rushed home to move his family to higher ground as water rushed through the commune submerging all 12 villages.

The voices of people calling for each other and screaming caused unprecedented chaos, he said.

After making sure his wife and children were safe, Thành decided to phone his younger brother Lê Văn Công and his friends Đậu Văn Hoàng and Phạm Văn Đồng to ask them to help rescue other villagers.

Within minutes Công, Hoàng and Đồng were at his house and they jumped in a boat to set out for some of the houses where the water had reached up to the windows. Thanh rowed the boat towards houses that had water up to the windows using a lamp to search in the darkness.

“Save me, let me get in the boat!” shouted 53-year-old Phạm Viết Phương from Trung Thành Village.

“We saw Phương and a neighbour standing in front of a house. The water was up to his chest,” said Thành.

“When they got in the boat, they were shivering with cold,” Thành said.

Seeing two elderly in the house next door, Thanh’s group also managed to help them.

The group went back and forth for four hours, paddling in the surging floodwaters. By 11pm they had rescued 60 people.

The recue operation had to be stopped at midnight because they were too tired, cold and hungry. Thành returned home to see his wife and children who were still clinging to a small boat.

“When I saw my husband I felt angry because he left us at home fighting the floods. I couldn’t contact him. I was afraid something bad had happened to him,” Nguyễn Thị Tình, Thanh’s wife, told newszing.vn.

Eating a pack of dried instant noodles in his wet clothes, Thành told his wife about what he had been doing.

“My phone is out of battery. People are calling for help, so we must help them. We have two boats. I think you’ll be fine here, ” he said.

Tình said she was no longer angry after hearing her husband’s story, and he set off again to help other people.

On the way, he also carried three neighbours to safety.

Over the following days they continued their mission.

With the help of rescue forces from other localities, Thành’s small group eventually saved more than 300 people in three days.

Talking about some of the problems they faced, Công said: “When we heard that a person from Phú Thượng Village needed to get to hospital, we set off immediately.

When we were about 1km from the village, the boat flipped and we were lucky to survive, but Thành lost all of his fishing equipment, he said.

“If we were afraid of death, we would not have done it, but we were worried that the boat could flip again,” Đồng recalled.

Now they are relieved that no one in their area died in the floods.

“It wasn’t a big deal. We work as fishermen on the river so are familiar with the local conditions,” Thành said humbly about his experience.

“The current was strong and we couldn’t reach every house, so we decided to pick up stranded villagers,” he said, adding that the only thing that mattered at that time was saving as many people as possible.

Trần Thị Loan, 63, a local resident, whose family was rescued by Thành’s group, said his family of four had been struggling in the floods for a day and the water had reached up to their shoulders.

“I screamed out for help but no one responded. At about 6pm on October 19, my family was rescued by Thành’s group. They gave me a second life,” Loan was quoted by Hà Tĩnh newspaper as saying.

Sharing his experience, Nguyễn Viết Tùng, another resident, said: “The water engulfed much of the commune very quickly. We couldn’t do anything but stay in the house because my father was sick.”

The family relied on peanuts to survive, and fortunately they were picked up by Thành and his friends.

Võ Tá Kỷ, chairman of Cẩm Duệ Commune’s People’s Committee, said during the floods, many outstanding individuals had been recognised by local authorities and residents.

“Thành saved the lives of hundreds of people with his courage,” he said, adding that the local government planned to reward Thành and his colleagues

This article was originally published in Vietnamnews

Vietnam imports over 86,000 completely built-up automobiles as of November 15

International Men’s Day: When and why do we celebrate?

Administrator - 27 November, 2020 0
The number of overseas Vietnamese has increased by 800,000 in the past five years, contributing remittances worth over 71 billion USD

Administrator - 2 June, 2020 0
A man in Da Nang has been found infected with the Zika virus, which causes microcephaly in babies, the first case in Vietnam in three years.