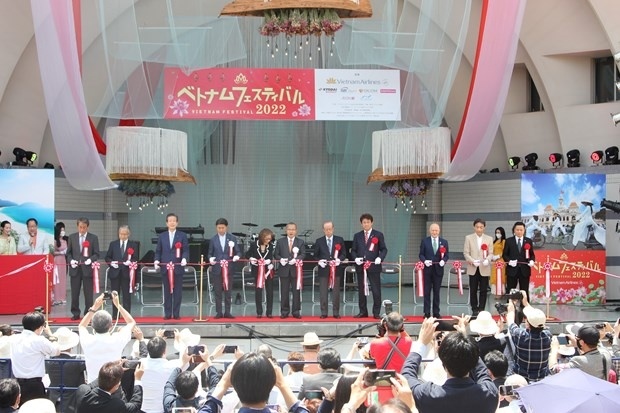 In his welcoming remarks, Vietnamese Ambassador to Japan Vu Hong Nam highlighted the significance of the festival to the development of friendly relations between the two countries. This year’s event returns to its pre-pandemic scale after two years of scale-down because of the COVID-19 pandemic, he said.

Former PM Fukuda expressed his delight at the robust growth of Vietnam’s economy in the post-pandemic period and the fact that the number of Vietnamese people in Japan is on the rise. He expected the bilateral relations to expand further in the coming time.

Miyake, for his part, affirmed that the Vietnam-Japan relations are at their best in history, which can be seen through this festival.

The festival has welcomed a large number of visitors, out of expectations, Ambassador Nam told the Vietnam News Agency’s resident reporters. This is the second time famous artists from Vietnam have taken to the stage at the festival, which excited both Vietnamese and Japanese audiences, he added.

The event featured music performances by leading artists from both countries, including Vietnamese singer Van Mai Huong, alongside Sunplaza Nakano-kun and Papala Kawai of Japan. Visitors also had a chance to enjoy signature food and tropical fruits from Vietnam.

Visitors were required to wear masks and practice physical distance while attending the festival to prevent COVID-19 spread.

The Vietnam Festival was first held in Japan in 2008. The annual event was initiated by late Japanese senator Matsuda on the occasion of the 35th anniversary of the Vietnam-Japan diplomatic ties.

The festival will run through June 5. About 100,000 visitors are expected to join the event.

Administrator - 18 March, 2020 0
NDO - A Nhan Dan (People) Newspaper delegation, headed by member of the Editorial Board Pham Song Ha, participated in an array of activities at the Portuguese Communist Party (PCP)’s 43rd Avante Festival from September 6 to 8.

Cultural activities to be showcased at Hung Kings Temple Festival

Administrator - 21 March, 2020 0
An exciting array of events are to be featured during the Hung Kings Temple Festival in the northern province of Phu Tho between March 24 and April 2, or from the first to the 10th day of the third lunar month, as a means of paying tribute to the nation’s founders.