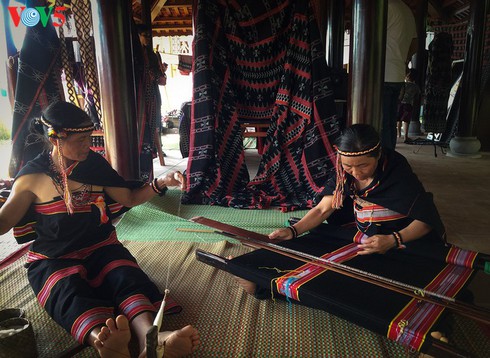 The craft has been preserved through many generations and widely introduced in other parts of Vietnam and abroad.

Since 2012 many brocade cooperatives have been formed in A Luoi as a way to preserve and develop the traditional Zeng weaving of the Ta Oi. As the products are sold well, the cooperatives’ local employees have had their income increase.

Zeng products are unique and intricate. In the past, the Ta Oi brocade cloth had only two colors, black and red, with black representing water and red representing fire. Later, they created multiple new colors – white, yellow, green and purple – from materials found in nature.

“I have learned new patterns online and combined them with traditional patterns to create exquisite brocade ties, sandals, and flower pins. My products use different patterns from those in the past because I’m making more modern items,” said Ly.

She added, “But traditional patterns are still used. Lots of young people want to learn brocade weaving. When I complete my studies, I want to pursue the craft.”

Zeng products used to be known only in Vietnam’s central region. Now more and more foreigners are coming to A Luoi to see how the brocade items are made and to buy them. A Luoi-branded Zeng products have been exported and shown at domestic and foreign fashion shows.

Minh Hanh, a Vietnamese fashion designer well-known at international fashion shows, was the first person to discover Zeng’s fashion potential and introduce it to the wider world.

Hanh said, “To develop a textile industry, you need policies. All a designer can do is inspire, be an activist, and solve problems of the craft. Although A Luoi’s Zeng textiles are now more widely known, using Zeng optimally will take more time.”

Nguyen Manh Hung, Chairman of the A Luoi district People’s Committee, said Zeng products have been introduced to visitors at the famous Hue traditional craft festivals.

“Zeng weaving has been recognized as a National Intangible Cultural Heritage and its brand is protected by the Intellectual Property Office of Vietnam. A Luoi district has adopted policies to promote Zeng products by organizing training classes, setting up cooperatives and cooperative groups, finding markets, and organizing Zeng design contests,” Hung explained.

Every Zeng product reflects multiple aspects of life – it is a practical item used in daily activities, a work of art, and an embodiment of Ta Oi culture.

Administrator - 7 April, 2021 0
The event is part of the national campaign entitled “Ao dai – a Vietnamese Heritage” launched by the Vietnam Women's Union Central Committee to honor the beauty of Vietnamese woman in their traditional costume.

Administrator - 22 July, 2021 0
Krafton has confirmed that it will release Battlegrounds Mobile India for iPhone users. The update will also bring various new additions and features to the game.