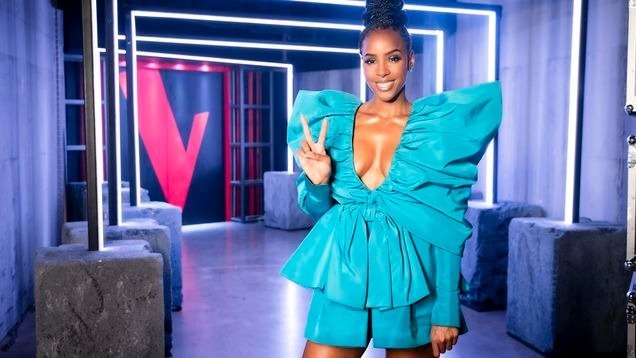 The Voice Australia judge Kelly Rowland made her intentions loud and clear with a dazzling turquoise dress by famous Vietnamese designer Cong Tri.

The American singer, 39, drew attention and applause when she appeared in a Cong Tri creation – a turquoise mini dress with a plunging neckline, oversized shoulders and a large waist tie – for the Blind audition episode of The Voice Australia as a judge on Sunday.

“Kelly Rowland stunned viewers on The Voice Australia with her bold fashion choice. All eyes were on the former Destiny’s Child when she stepped out in a bright blue mini dress with massive, eye-catching shoulder pads,” wrote Ireland news site Extra.ie.

“As if meeting the latest Voice artists hasn’t been enough water cooler fodder, coach Kelly Rowland had to go all out on her Blind Auditions getup, a stunning turquoise creation by designer Cong Tri,” gushed Australian newspaper Nine. “It’s the perfect choice going into the intense competition of Blinds, especially given the new addition of the divisive Block button. With these power shoulders, there’s nothing this Destiny’s Child can’t do, and it’s proof she means business.”

The Cong Tri dress draws inspiration from the 80s. The design was first introduced at the New York Fashion Week in September 2019, in the Spring/Summer 2020 collection. Cong Tri said the dress is made of high-end materials used by famous designer brands like Valentino, Oscar de la Renta and Dior.

Rowland’s agent contacted Cong Tri about the dress in April. The dress is custom made for Rowland’s curves. The Covid-19 pandemic made shipping difficult, but it did reach the singer in time for the show.

This design has been worn by some celebrities in Vietnam, notably singer Ho Ngoc Ha.

After the New York Fashion Week, Cong Tri’s Spring/Summer 2020 collection stayed in the U.S. for celebrities to wear at events and photoshoots for the Vogue magazine.

Kelly Rowland is a former member of Destiny’s Child, one of the world’s best-selling girl groups of all time. She has also released four studio albums and sold over 30 million records as a solo artist. Her work has earned several accolades, including four Grammy Awards. Rowland has been a judge with The Voice Australia since 2017.

Vietnamese women high fliers do their bit for homeland

Administrator - 24 October, 2020 0
There’s a proud “love road” inside the campus of Hanoi National University of Education where generations of students have checked-in. The road shaded by long line of freshwater mangroves.

Administrator - 24 October, 2020 0
October is considered the most beautiful cloud hunting season in Sa Pa, Lao Cai. In this season, hundreds of couples, families, and groups... flock to the mountainous province to conquer the splendid Mount Fansipan.

Administrator - 18 March, 2020 0
A hemmed-in house in Saigon uses a non-parallel layout to have spacious rooms and plenty of natural light.

When a modern house takes extra pains to be traditional

Administrator - 18 March, 2020 0
A house in a coastal village of northern Vietnam catches the eye with its creative design and use of local materials.