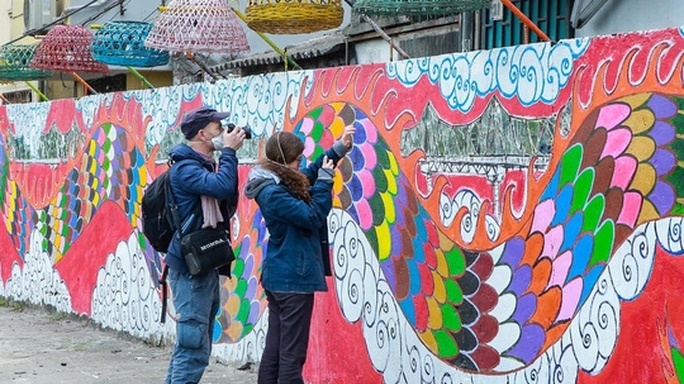 An art space on the riverbank

Painter Nguyen The Son, a curator of the project, said that the project was launched in early January this year with the participation of 16 painters, including Spanish fashion designer Diego Cortiza and Australian artist George Burchett.

Burchett’s father was a journalist who worked in Vietnam’s battlefield and met many Vietnamese historical figures. Meanwhile, Cortiza has lived in Hanoi for more than 20 years, long enough to grasp a certain understanding about Hanoi’s culture.

Before the project was launched, the participating painters spent time discussing with local residents to listen to their stories and learn more about the area’s historical background, which would help them to choose the appropriate theme for their artworks.

Thanks to the painters, the 20-year-old long wall cutting through Phuc Tan ward is now adorned with 16 artworks made from utilising recycled materials, which conveys the artists’ call to raise public awareness of environmental protection.

Utilising iron scrap and stainless-steel mirrors, Nguyen The Son created an installation entitled ‘Street Hawkers’, illustrating labourers working along the banks of Red River. Son also contributed two bas reliefs made of concrete covered with ceramic to the projects, which reproduces the bustling trading activities on the riverside in the olden days.

The ‘Ancient Boats on Red River’ installation by Vu Xuan Dong comprises 10,000 used plastic bottles, recalling the busy scene on the pier in the riverbank hundreds of years ago.

In his artwork entitled ‘Riverside City’, Nguyen Ngoc Lam gave a new coat to used drums by adding colour and windows and piling them into high-rise lookalikes.

Meanwhile, Spanish fashion designer Diego Cortiza made his ‘Red River’s Dragon’ artwork by collecting bamboo chicken cages from the nearby Long Biên Market and turning them into lanterns to light up the colourful dragon on the wall.

These artworks were supported with an LED lighting system, which brings special effects at night and makes them more eye-catching for visitors

Joining hands for the environment 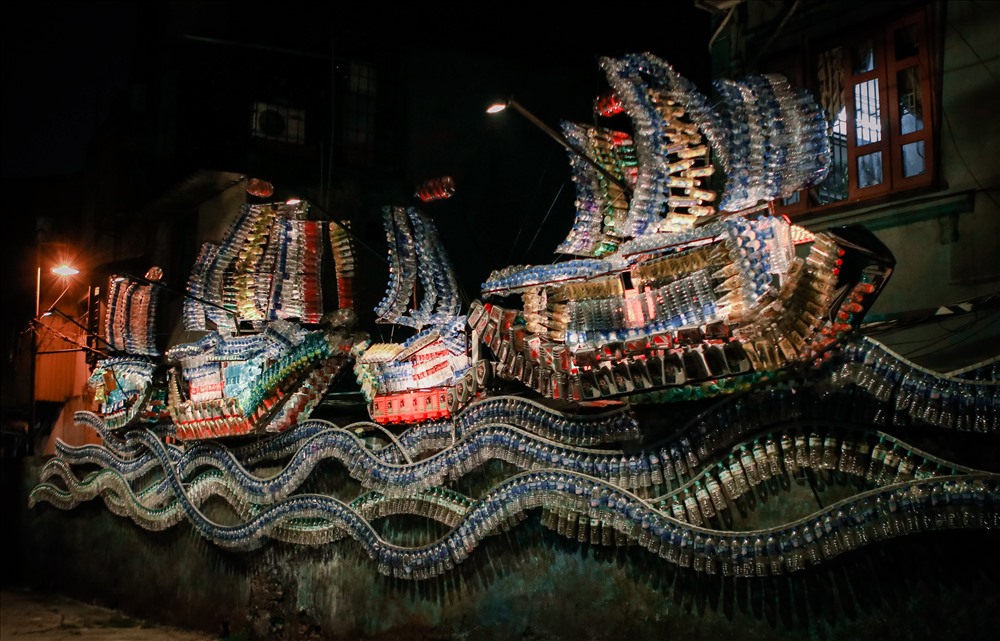 The ‘Ancient Boats on Red River’ installation by Vu Xuan Dong comprises 10,000 used plastic bottles, recalling the busy scene on the pier in the riverbank hundreds of years ago (Photo: laodong.vn)

The project has received much applause and appreciation from local residents as it has breathed life into a previously defunct Red River area, making it cleaner and more beautiful. The locals are now acting as the artworks’ guardians as well as helping the artists to collect recycled materials for their artistic creations.

It can be said that the project has brought joy and happiness to local people who are now looking forward to the next stage of the project, which is designed to improve the site’s lighting systems, road and green area with the aim of turning the site into a cultural and tourist spot for visitors to Hanoi.

Pham Tuan Long, deputy chairman of Hoan Kiem People’s Committee said that the project not only aims to create an artistic space on the riverbank but also aims to raise awareness and a higher sense of responsibility for environmental protection among those living in the community. By bringing the arts closer to the public, the local authorities hope that local people will actively participate in improving their living environment.

In the longer term, the land plot opposite the wall, next to the river, is to be made into a flower garden.

According to young painter and project member Nguyen Xuan Lam, all of the participating artists volunteered to join the project. Previously, Lam partook in a project to draw mural paintings on Phung Hung street. The project created a new image for the street, turning it into a vivid check-in place for visitors and locals as well as those who wish to have a further understanding of Hanoi’s time-honoured culture and history.

Hanoi became an official member of UNESCO’s Creative Cities Network in October 2019, demonstrating the city’s responsibility to the region and the world in promoting creativity and increasing the participation of people in cultural life and integration.

Unique marriage custom of the Raglai

Administrator - 1 October, 2020 0
The Raglai are a matriarchal ethnic minority group who live in Vietnam’s Central Highlands. When a Raglai couple decides to get married, the girl’s family decides everything.

Administrator - 4 February, 2021 0
The Hanoitimes - The volunteer group, called itself as “Ca Chep” or The carp, delivers a message of environmental protection: "Release fish- Not plastic bags".