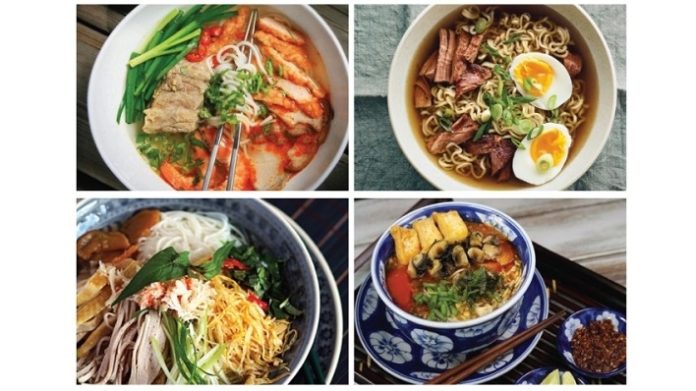 records were based on applications submitted by the Vietnam Book of Records (VietKings) in early 2020.

First, Vietnam is recognised as the country which owns the most “strand and broth” dishes in the world with as many as 164 dishes, these also being continually updated.

Vietnam’s cuisine is proud with its assorted menu of “strand and broth” dishes across numerous varieties of noodle, vermicelli and rice noodle. The most popular among them include ‘pho’, bun oc (snail noodle), bun cha (noodle with grilled pork), and hu tiu.

The third record acknowledges Vietnam as the country with the world’s most dishes made from flowers. Vietnamese cooks have produced 272 dishes from 43 different flowers, which are seasoned and cooked in salads, hotpot and soups.

It is not a surprise that Vietnam is also the country which has the most kinds of special rolls in the world. Vietnam has even been dubbed as the “heaven of spring rolls” with 103 dishes. The rolls often go along with various types of vegetables and herbs and can be dipped into sweet and sour sauce.

Spade-fish: A rich taste of the sea

Administrator - 27 August, 2020 0
NDO – From the fourth to the eleventh lunar months each year, fishermen in southern central coastal provinces of Binh Thuan, Ninh Thuan and Khanh Hoa enter spadefish season. This species of indigenous marine fish is an indispensable ingredient that has brought fame to the cuisine of Phan Thiet City, Binh Thuan Province.