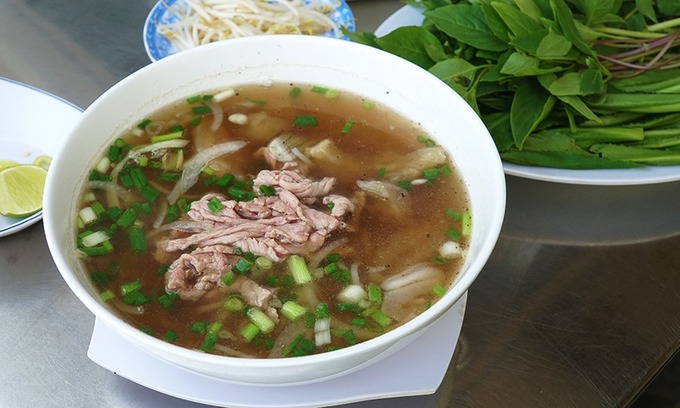 A hot bowl of beef pho in Saigon. Photo by VnExpress/Di Vy.

“Beef is simmered for hours with cinnamon, star anise and other warm spices to create a wonderfully aromatic base for this rice noodle soup,” CNN said.

The cable news network added beef pho remains the most beloved version in Vietnam, with options including the original raw beef, a mix of raw and cooked beef, brisket and tendon.

Pho is a bowl of flat, soft rice noodles dipped in a fragrant beef or chicken broth flavored with condiments. The soup is considered a national dish and can be found all over the country though it originated in Hanoi before being taken to the south, where people have added their own influences to the dish.

Pho has been getting rave reviews from global travel magazines for decades, and no visitor to Vietnam fails to mention it.

In 2019, Lonely Planet recommended it as one of the best hangover cures on the road. The U.K.-based travel site Rough Guides named the soup among the world’s 15 best foods that are easy on the pocket.

CNN in 2018 included pho in a list of the 50 tastiest dishes on earth after polling its Facebook readers.

Administrator - 21 March, 2020 0
Hoi An has recently been recognized as Vietnam’s new food capital by the World Association of Chef Societies. The ancient town, already best known for peaceful streets and mossy houses, is now a culinary destination of Vietnam.

Administrator - 18 March, 2020 0
The dish is certain to bring tourists an impressive and unforgettable feeling through its rustic and moreish taste.