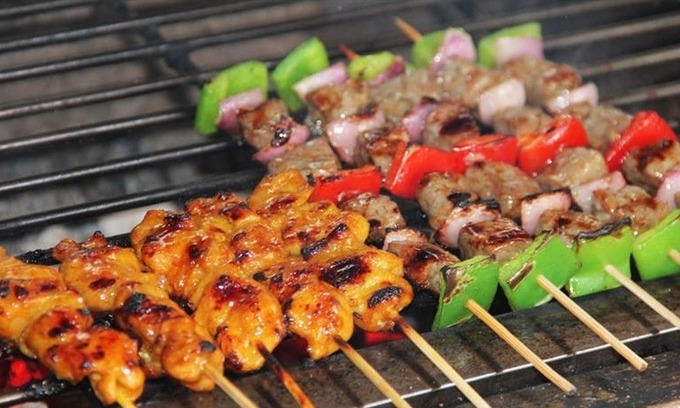 Grilled skewers are one of the most popular street foods in Saigon. Photo by Shutterstock/Andy Tran.

Ho Chi Minh City has beaten many of world-famous food hubs to break into the top five cities for street food-obsessed travelers, says a new survey by CEOWorld.

Vietnam’s southern metropolis ranked fourth among 50 best cities in the Street Food City Index 2019, the first of its kind released on Thursday by the U.S.’s leading business magazine.

To get a figure for the number of street food vendors in each city, the U.S. magazine analyzed street food data in Google Maps and used date from Numbeo, the world’s largest database on countries and cities in the world, to find out the current price of an inexpensive meal in each city. Data from the United Nations Children’s Fund (UNICEF) was used to rank the cities by food hygiene.

The list was dominated by famous Asian food paradises that receive millions of tourists every year. Singapore has been recognized as the world’s best city for street food-obsessed travelers in 2019, followed by Bangkok in Thailand and Hong Kong.

Vietnamese cuisine has become better known in the world over the last couple of years, with international chefs and prestigious food magazines praising several national dishes.

Earlier this year, the cable TV channel made five recommendations for a food tour in Hanoi to foreign tourists and international reporters covering the Trump-Kim summit where the U.S. President Donald Trump and North Korean leader Kim Jong-un found ways to advance peace on the Korean peninsula.

Vietnamese ranked among the world’s 15 favorite cuisines in a survey released earlier this year by YouGov, a British online market research company.

Some of the dishes found on street corners here have made it to all corners of the world, like banh mi, a Vietnamese sandwich which has been listed in the top 20 street foods in the world by Fodor’s Travel, a U.S travel site.

A tour for coffee lovers in Da Lat

Eating like a local in Ho Chi Minh City

A foodie’s guide to Danang

Administrator - 18 March, 2020
0
This is a traditional food of the minority community in Ha Giang.

Administrator - 18 March, 2020
0
You can find many types of excellent spring rolls all over Vietnam, but nem vuong, made with fresh crab and shrimp in Hai Phong, are particularly good. Unlike regular spring rolls, they are wrapped into a square shape before being fried. The Hai Phong speciality was selected by CNN Travel as one of ten delicious street foods which tourists should not miss when visiting Vietnam.