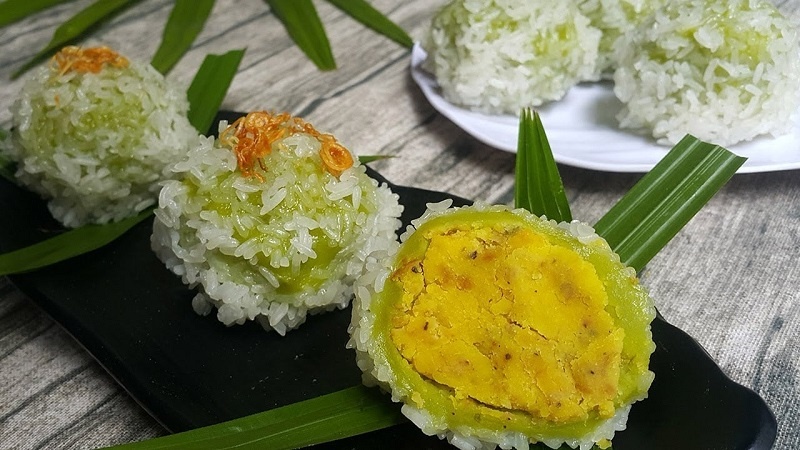 At the end of the 19th century, Hanoi was already famed for its cuisine, but then, as today, the best-known dishes were not found in large restaurants or at fancy feasts, street stalls and on the dining tables of ordinary Hanoians.

No matter what time of day or night, a light meal has always been easy to find in the capital, but one dish that occupies a special place in the heart of Hanoians, the khuc pie.

I was born and raised on the outskirts of Hanoi where after every harvest the rice fields would be covered with the fresh cudweed (khuc) leaves, the main ingredient of khuc pie.

In the spring, when the misty rain coats the north of Vietnam in its haze for days at a time, the cudweed pushes its way through the earth in the fields, covering the rice stubble with its bounty.

After picking the vegetables, my mother would wash them in rainwater before boiling them, then grind the boiled vegetable in a stone mortar, mixing it with sticky rice flour to make a dark green mixture which would be rolled into portions the size of a child’s fist.

Each piece would then be rolled in boiled, green peas and meat, which had been soaked in pepper.

Finally, the khuc pies would be layered into a large steamer, each layer covered with carefully soaked sticky rice. The fragrance of steaming khuc pie will live forever as one of most potent childhood memories.

When the pie was so cooked that its delicious aroma permeated the house, my mother would take each piece from the steamer and lay it on a plate, which she would first offer to the ancestral altar.

Soon after, each child would be given a hot piece there in the kitchen. Holding a hot khuc pie in our little hands and examining each grain of sticky rice before finally biting into it was one of the great joys of those cold nights.

Today, as an adult, I sometimes despair of ever tasting these “real” khuc pies again.

Skyscrapers have risen around the city, sprouting in place of the rice fields, and Khuc is now so rare that cooker have to order it from far away, or even using dried leaves from the last crop to make the specialty.

As the fields surrounding the city are replaced by the urban sprawl, fewer and fewer children have the chance to enjoy this spring treat. Perhaps the time is past for this particular traditional favourite, and I often wonder if in the next ten or twenty years, how many cooks could remember the way a khuc pie is cooked?

And as the city spread, a home-made khuc pie is becoming a rarity.

A memorization of time

Administrator - 31 December, 2020 0
The Hanoitimes - The tiny restaurant in Hai Ba Trung district would recall the nostalgia of old Hanoi in 1990s by its traditional dishes and impressive decoration.

Administrator - 21 March, 2020 0
Dam Sen Park in HCM City, operated by Phuthotourist, will host a wide range of entertainment events during the Lunar New Year holiday (Tet), thus becoming a great entertainment destination for revelers in the city to celebrate the Year of the Pig.