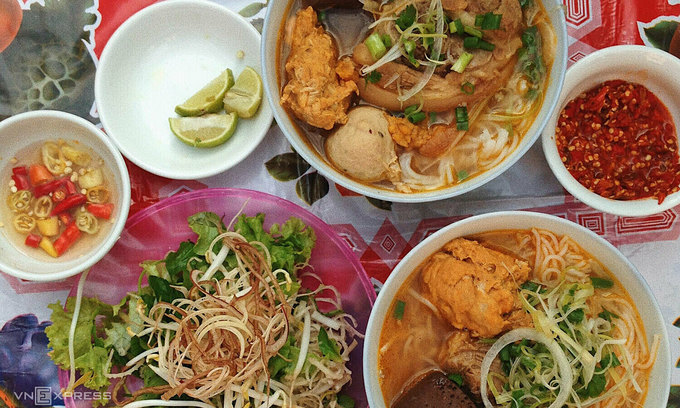 Kim Chau Restaurant in Dong Ba Market that serves bun bo hue was revealed by Laurie Woolever, a longtime collaborator of Bourdain and co-author of “World Travel: An Irreverent Guide,” as one of the five food destinations at the top of the late chef and food presenter’s list.

During his many return visits to Vietnam, Bourdain made it to Hue, home to Nguyen Dynasty (1802-1945), Vietnam’s last royal family.

While Hue’s cuisine is characterized by the small, delicate steamed rice cakes and crepe stuffed with shrimp, pork and vegetables, the dish that stole Bourdain’s heart was “the lusty” bun bo Hue soup, specifically served at the Kim Chau restaurant in Dong Ba Market, Woolever wrote on The Guardian.

“In the hierarchy of delicious, slurpy stuff in a bowl, bun bo hue is at the very top,” Bourdain said, while perched on a stool, enjoying a taste in the morning humidity, she wrote.

Bun bo Hue is a specialty of Hue where it was invented. The broth requires both pig and beef bones to be boiled with a generous dose of lemongrass, sugar, annatto, and shrimp paste. Vendors then add various ingredients like sliced brisket, crab balls and pork pie. Adventurous eaters can also add cubed pig’s blood for even more flavor.

When served, the dish is garnished with a tangle of vegetables like lime, scallions, cilantro, banana blossoms, mint, basil, and Vietnamese coriander.

Anthony Michael Bourdain was an American celebrity chef, author, travel documentarian and television personality. He committed suicide in France in 2018 at the age of 61.

He hosted and starred in several programs featuring international cuisine, culture and the human condition, including the travel and food show “Anthony Bourdain: Parts Unknown,” which uncovered the cultures and cuisines of several lesser-known places around the world.

Bourdain became a familiar face for millions of Vietnamese after he accompanied U.S. President Obama to a bun cha eatery in Hanoi in May 2016.

Ca muoi – a favorite Vietnamese side dish in summer

No name for fame at this Chau Doc fish noodle stall

Administrator - 18 March, 2020 0
NDO/VNA – The Da Nang International Food Festival opened on the East Side of Dragon Bridge in the central city on the evening of June 2.