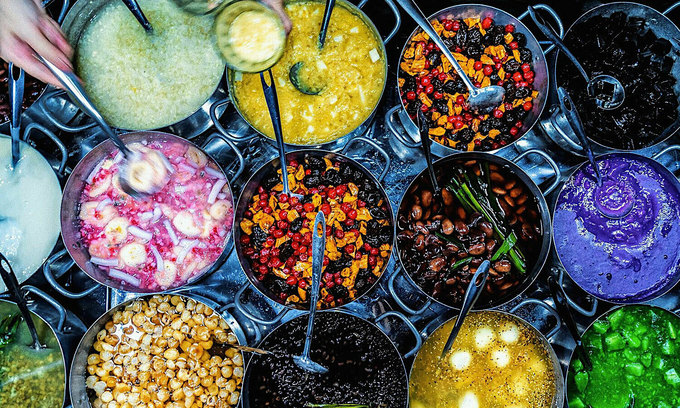 Hue-style sweet soup is one of the most well-known dishes in Thua Thien-Hue Province, central Vietnam. Photo by VnExpress/Thanh Toan.

Phan Thanh Hai, director of the provincial Department of Culture and Sports, said Hue cuisine strongly demonstrates its cultural values, history, customs, arts and has its own identity.

Hue cuisine has become a brand symbolic of Vietnamese culinary culture. It is not only the precious heritage of the Hue people and the Vietnamese people, but also deserves to be included in UNESCO’s representative list of the Intangible Cultural Heritage of Humanity, Hai said.

In order to be eligible for UNESCO recognition, it is necessary to propose to the Ministry of Culture, Sports and Tourism to include Hue cuisine in the list of national intangible cultural heritages, he added.

An intangible cultural heritage is a practice, representation, expression, knowledge, or skill, as well as instruments, objects, artifacts, and cultural spaces considered by UNESCO to be part of a place’s cultural heritage.

Hue was the seat of the Nguyen Dynasty, the last royal family to rule the country from 1802 to 1945. It is home to royal tombs, ancient palaces and pagodas that attract millions of foreign visitors every year.

Administrator - 18 March, 2020 0
Going to Tu Ky in Hai Duong province, visitors can enjoy specialties made from Ruoi (a kind of rag worm whose scientific name is Tylorrhynchus heterocheatus).  They can eat dishes such as Ruoi omelets, rolls of Ruoi or Ruoi cooked with bamboo shoots. Among them, braised Ruoi stands out as an intriguing dish.