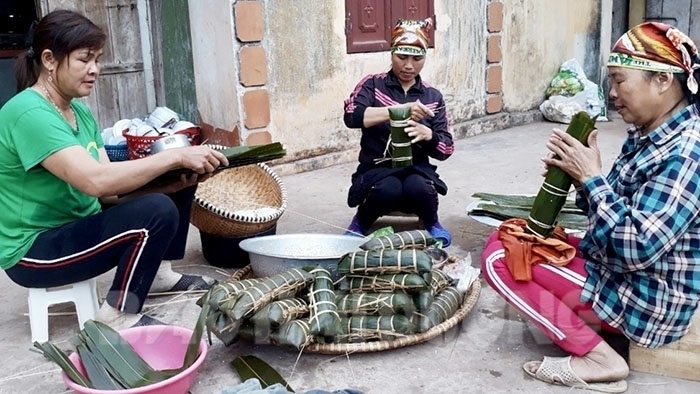 At the end of the year, villagers are busy making final preparations for Tet celebrations, including assembling the ingredients to make ‘chung’ cakes.

I was excited to join my mom in trips to the rural market, quite far from my house but we used to take a shortcut across the rice field. Everyone who went to the market shouldered bamboo poles to carry their goods home.

At the market, my mother stopped at a shop selling ‘chit’ leaves, used to wrap long ‘chung’ cakes. She carefully selected every single leaf and checked whether it was torn or not. She also bought bamboo string to tie the cakes.

The making of long ‘chung’ cakes requires a lot of skills. Elders in my village said that it was a must-have skill for young women before getting married.

When we were back home, my mother boiled the ‘chit’ leaves and then fished them out and washed them carefully on both sides to remove any dust.

The leaves are then cut two ends to shape a square. My mother first placed bamboo strings onto a flat aluminum tray, and then lay down several layers of chit leaves. The leaves must be stacked tightly to each other to prevent rice from dropping out.

The stuffing of a long ‘chung’ cake included a layer of soaked glutinous rice, followed by mung bean, and finally another layer of rice so that mung bean could be placed in the centre of the cake. The white colour of rice went along with a yellow line of mung beans made the stuffing look beautiful.

The most difficult step was wrapping the two ends of the cake to form a cylindrical shape for the cake. Without these skills, the ‘chit’ leaves could tear and the rice would fall out.

After my mother finished her job, I tightly wrapped the cakes again several times with several length of bamboo strings before steaming.

My mother and I would then watch the fire during the boiling process, during which we could smell the fragrance of the glutinous rice and ‘chit’ leaves.

After several hours, the cakes were well cooked and left to dry in a flat bamboo basket. I was assigned to rolling the cakes, a step which helped the cakes become more delicious while keeping their cylindrical shape.

The cake was sliced into wheel-shaped servings as an offering to the ancestors on the last day of the year. The freshly cut cake was still steaming, bringing a scent of Tet to our house.

Long ‘chung’ cake is still an indispensable dish in my village during Tet. It is also a part of my childhood and reminds me of the sincerity of my hometown.

Administrator - 25 January, 2022 0
The old custom shows the Vietnamese respect to the guardian spirit of the house as well as conveys the Vietnamese wishes for a prosperous upcoming year.

Administrator - 25 January, 2022 0
NDO - In the final days of November, Hang Ma street (Hanoi) has been filled with a Christmas atmosphere including all kinds of brilliant red, yellow and green decorations of pine trees, laurel wreaths and Santa Claus.

Administrator - 25 January, 2022 0
Novak Djokovic could find out later on Sunday if he can defend his Australian Open title after the Chief Justice of the Federal Court said he hoped to release a decision later in the day on whether the tennis star, who has not been vaccinated against the coronavirus, can stay in the country.

Administrator - 3 October, 2021 0
Sponge cake with salted egg in Vung Tau city, the central province of Ba Ria - Vung Tau, is the size of a cupcake that can be eaten in one mouthful unlike the full-sized version with salted egg and meat floss on top usually found elsewhere.

Administrator - 12 April, 2020 0
'Banh can' (mini egg pancakes) is one of favourite kinds of cakes in Phan Rang - Thap Cham city, the southern province of Ninh Thuan.