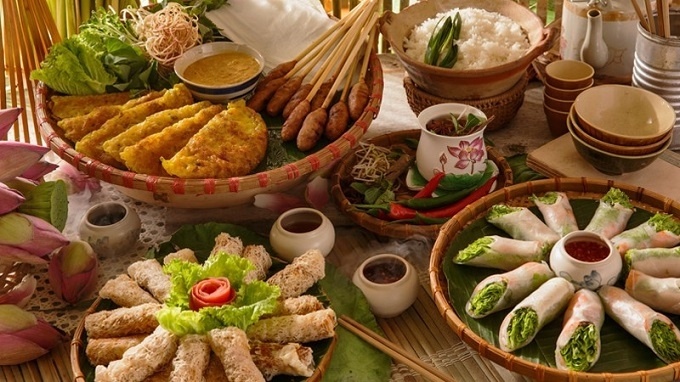 How to make the culinary value of the central region more prominent, especially in the post-pandemic period, was one issue discussed by experts at a webinar themed “Practical value – Culinary culture of central region” which took place last weekend.

According to Director General of the Vietnam National Administration of Tourism (VNAT) Nguyen Trung Khanh, Vietnam is one of the countries with the most UNESCO World Heritage Sites in the Southeast Asia, with 8 of the world’s cultural and natural heritages, 13 intangible cultural heritages, three world documentary heritages and four Asia-Pacific Documentary Heritages under the UNESCO Memory of the World Programme. With its richness, diversity, harmony and sophistication, Vietnamese cuisine has been always considered a cultural heritage as well as a valuable tourism resource.

In recent years, Vietnamese cuisine has made a big splash and received major world awards such as Asia’s Leading Culinary Destination 2019. Vietnam’s spring rolls and pho (noodle soup) were also voted by CNN as one of 50 most delicious dishes in the world in 2019. Many leading politicians such as former US president Barack Obama or artists and influencers in the world have spent time enjoying quintessential Vietnamese dishes when they visited the country.

Vietnam’s cultural and culinary heritages have recently performed their roles as tourism ambassadors, contributing to attracting millions of international tourists to Vietnam. Director General of the VNAT Nguyen Trung Khanh affirmed that “the central region’s heritage road” is an attractive tourism product for domestic and international tourists. He also emphasised that tourism has been contributing to making Vietnam’s cultural and culinary heritages shine.

However, preparations should be made carefully to further promote the values of Vietnamese cuisine in general, and the central region’s cuisine in particular, in the post-pandemic period. Accordingly, the connection among State management agencies, associations, localities and enterprises will be enhanced to develop culinary, cultural and tourism products in association with “the central region’s heritage road”, creating a spillover to other regions in the country, getting ready for welcoming international visitors after the pandemic is over.

The question of how to bring the cuisine of central region closer to international friends was discussed in depth by the experts. They focused on standardising culinary establishments, applying high technology, increasing the connection between artisans and entrepreneurs and facilitating better policies.

Dr. Doan Minh Phu, General Director of the Seafood World Restaurant chain stressed the standarisation of culinary facilities to help visitors to the central region is essential. He also noted that it is essential to study visitors’ tastes depending on the region to adjust spices so that most guests can enjoy the delicious dishes of the central region.

With 30 years of experience in the culinary industry, Dr. Huynh Dat, General Director of the Ong Bep Joint Stock Company, hailed the application of technology in processing and preservation to bring higher and longer-lasting value to the culinary products of the central region.

He also said that it is necessary to make solutions in terms of processing raw materials into refined products with high commercial value. Accordingly, modern technology plays a very important role.

Dr. Huynh affirmed that with authorities’ deep knowledge, vision, passion and modern technology, the culinary values of the central region in particular and Vietnam in general will be promoted successfully, towards forming and promoting the brand of Vietnamese culinary tourism to the world.

The dishes in the central region are rustic but extremely impressive and unique (Photo: Vietnamtourism)

Emphasising the importance of the connection among the State, researchers, farmers and businesses, former Director of Quang Nam Provincial Department of Culture, Sports and Tourism Dinh Hai, who is also a member of Vietnam Culinary Culture Association, said that the authorities should make policies on supporting the development of culinary culture, creating favourable conditions for the formation of clean raw materials and beautiful culinary street, and encouraging farmers to create sources of clean materials for culinary businesses.

Artisans should enhance their exchanges of experiences on cuisine promote the value of Vietnamese cuisine. Vietnam Culinary Culture Association will strengthen the linkage along the sides as well as standarisation of the training for food processing.

Agreeing with Dinh Hai’s point of view, Dr. Doan Minh Phu affirmed that it is crucial to create a connection among culinary artisans and entrepreneurs and the Vietnam Culinary Culture Association’s role is very important.

Former Deputy Director of Ho Chi Minh City Department of Tourism La Quoc Khanh asked the management agencies in central localities to continue their support in this field through the development of supportive policies and creation of favourable conditions for forming local culinary culture associations.

Highlighting the role of good business models, General Director of Han River Startup Incubation Centre, Ly Dinh Quan stated the fact that startups in this field in Vietnam are facing certain difficulties and challenges in market identification, process standardisation, personnel training, brand development and cost-effective optimisation. Therefore, it is crucial to enhance the coordination between State and private sectors to assist startups to overcome difficulties.

Nguyen Quy Phuong, Director of the Department of Travel under the VNAT, said amid the complicated development of COVID-19 pandemic, the virtual tourism promotion forms are the most effective methods to bring Vietnam’s tourism, culture and cuisine closer to international friends.

With achieved results, online activities will be still a mainstream trend of the future. Therefore, online programmes should continue to be held to introduce specific dishes of the central region and other localities in the country.

Administrator - 1 August, 2021 0
NDO – A photo exhibition entitled ‘Toque blanche’ will kick off at the French Cultural Institute in Hanoi (L'Espace) on April 9, to highlight the excellence of French gastronomy.

Administrator - 18 March, 2020 0
NDO – During early-winter days with cool weather in the early morning and at nightfall in Hanoi, it is very interesting for both Hanoians and visitors to enjoy specific delicious food.