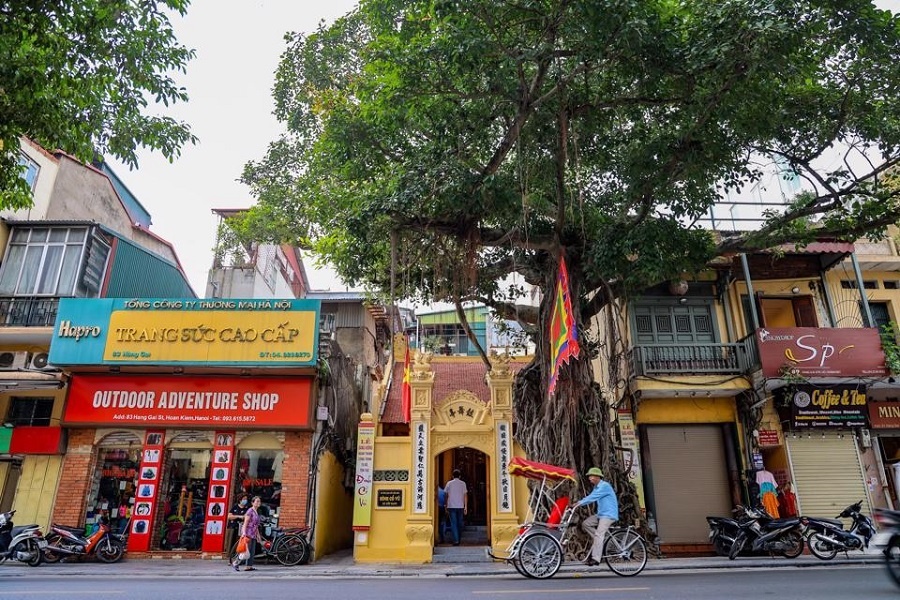 Located at 85 Hang Gai Street (Hang Gai Ward, Hoan Kiem District, Hanoi), Co Vu Communal House is not only a valuable monument in terms of history, culture, architecture and art, but also a cultural attraction for domestic and international visitors.

Lying under the canopy of an old banyan tree, the communal house’s unique artistic value is reflected in carved wooden artifacts, including a horizontal inscribed board, couplets, decorative door frames, a worship throne and a Bat Buu set or eight precious worshiping objects lacquered in gold and crimson, contributing to its architectural beauty.

The cultural monument dates back to the Le Dynasty and has been classified as a city-level historical relic by the Hanoi People’s Committee, by August 4, 2016.

Over its long history, the communal house has been restored many times in 1778 (the 39th Canh Hung year) under Le Hien Tong reign, in 1881 under King Tu Duc’s reign, and especially in 2007. It consists of three parts: nghi mon or the main gate, tien te or front hall and hau cung or sanctuary. This type of house features the typical floor plan of traditional architecture in the Old Quarter, with two buildings forming the Chinese letter 二 meaning “two”.

In 2019, the Co Vu Communal House was renovated in some items, including nghi mon (main house), garden, fencing walls, walkway, water supply, drainage, waterproofing treatment, along with lighting and fire protection installation, among others.

An incense offering ceremony was held last week to mark the reopening of the communal house.

According to the chairman of the People’s Committee of Hang Gai Ward, Nguyen Manh Linh, the Co Vu Communal House keeps cultural artifacts of historical value, in which the most special are ancient stone steles embedded in the walls, dating back as far as 1778.

“The renovation work is a meaningful activity in promoting cultural and historical values, preserving heritage for future generations and meeting the people’s religious needs,” he said.

“With such a giant renovation, Co Vu Communal House has become a worthy space for cultural and religious activities, bringing the community together as well as showing the beauty of Vietnamese culture,” he added.

Before the completion of the renovation, Co Vu Communal House was opened to visitors on the 14th, 15th, 29th and 30th days of every lunar month. After the finish date (July 27, 2022) the People’s Committee of Hang Gai Ward plans to open the site every day to welcome domestic and international visitors.

With its serene appearance imbued with traditional culture in the middle of a bustling shopping street, Co Vu Communal House is not only a valuable monument in terms of history, culture, architecture, and art, but also a cultural attraction for domestic and international visitors.

Vietnam among best countries for retirement