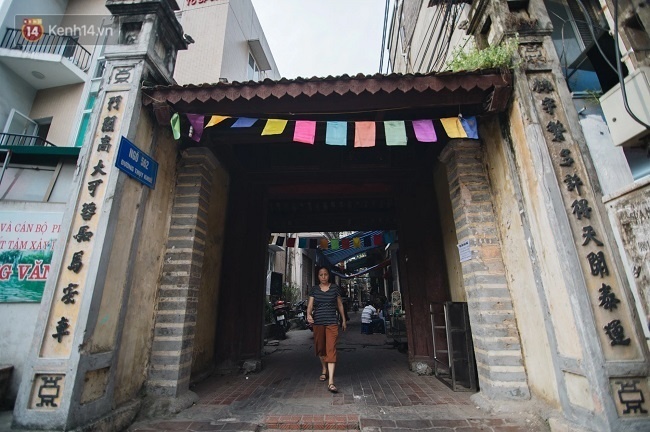 No place is more appropriate than Thuy Khue street for people to learn about the history of Hanoi. There, old village gates and houses, as well as vestiges of old villages and traditional craft, are hidden behind high-rises.

The street of old village gates

With only about four kilometers, the street has many centuries-old gates of villages.

Every ten of meters along the street, there is a mossy traditional gate. Each is unique in size and architecture. More particularly, most gates are on the side by West Lake where ancient villages were located before.

In modern life, however, these gates still have typical features of the old-time such as the parallel calligraphy on both sides, ancient trees, small markets opening every morning, and a ground for people to have some tea, children to play, and elders to enjoy chess games.

Despite many changes in the urbanization and modernization of the city, the lifestyle behind these gates remains the same as it was hundreds of years ago, very simple and peaceful.

Yen Thai village in Thuy Khue street had been known for centuries for making paper, especially paper made from Do tree (Poonah). It was appreciated as valuable material as it was used in the royal court for drafting royal decrees and in daily life for printing books and folk art paintings like Dong Ho Painting.

In the old-time, from early morning, the rhythm of the pounding resounded the whole area. The work was hard. The bark of the tree was soaked in lime juice before being cooked. Then the craftsmen had to pound it to make a fine powder for sheets of paper to last, up to hundreds of years. The sound of this pounding in Yen Thai inspired poetry, making it a romantic part of ancient Hanoi.

In the village, Nguyen The’s family was famous for the best Do paper for many generations. Unfortunately, the last successor of the family passed away years ago with the secret of the trade.

In recent years, the Tay Ho District People’s Committee has launched the project “Restoring Traditional Do Paper Making in Yen Thai Village”, which aims to help preserve and promote the cultural identity and potential of Buoi Ward on cultural and tourism development. Today, Do paper is still widely used in art decoration and souvenirs. The project is expected to recreate the image of Yen Thai Village soon.

There were many silk-weaving villages in the country but Buoi silk, as the “brand” for the silk products of Trich Sai Village in the area, was favored as it was one of the best qualities.

The yarn to make Buoi silk was carefully selected. For every five yarn of silkworm, only one was selected for weaving Buoi silk.

Therefore, Buoi silk was very light and soft. It can still keep its shape and smoothness after being crushed by hand. Moreover, the weaving process was complicated. One piece of silk required four to five people to work together. In the old-time, only noble and rich families could afford Buoi silk.

The Buoi silk trade was lost in the 1950s, due to the emergence of new materials and mechanization. Fortunately, about half a century later, a woman from Trich Sai Village, Vu Thi Minh Hoang, to whom, as a child, her grandmother told stories about trade in her homeland, nurtured her dream of restoring it.

Hoang spent several years learning and experimenting with artisan Phung Van Thiem, who was considered the last to keep the secret of Buoi silk making.

Thiem told The Hanoi Times that he really worried about the loss of this traditional craft because there is a lot of clothing products of modern life attracting people.

“Seeing the loss of the trade, I could not sleep many nights and tried to find a solution to revive the Buoi silk making. I did not want to witness this craft, one of the country’s quintessence, would have fallen into obligation forever,” he said.

Thiem said it’s an uneasy task so he had failed after spending a lot of time and effort. “I had to give up.”

“When Hoang found me to learn about the craft, I was very happy. We have dealt with a lot of challenges because the craft’s techniques are very difficult. But it is nothing the matter.”

In 2008, Thiem’s silk was recognized as a typical Buoi area. He then opened a shop called “Lua Ha” at 538 Thuy Khue Street, the only place selling Buoi silk today, connecting one of the quintessential lands of the past with the present.

Along with traditional types of Buoi silk, Hoang also makes an effort to create new models in order to restore and promote the silk brand that her ancestors were proud of.